by Henrik Jensen’s ‘Followed By Thirteen’ 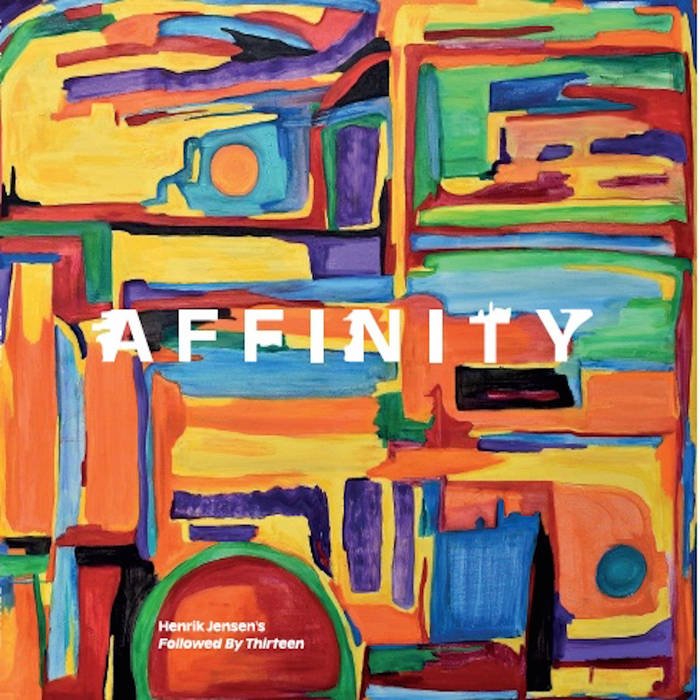 FOLLOWED BY THIRTEEN
AFFINITY
Released 20th March 2020
“Jensen is thoughtful, richly chordal and attractively Charlie Haden-like on the bass"
John Fordham, The Guardian.
“a rewarding listen” Alyn Shipton, BBC Radio 3
"The balance between composed and improvisation, as in the best jazz, disappears so that one is left with a complete and
perfectly coherent quartet performance"
Chris Barber, Jazzviews.
“a highly thoughtful and skilfully executed jazz album…” Stephen Graham, Marlbank.
“This cosmopolitan line-up works superbly well…” Bebop Spoken here.
“bristling with such obvious vitality and ebullience” Adrian Pallant, AP reviews.
“Four of the best young musicians on the London jazz scene” The Jazzmann
Listen to Affinity by Henrik Jensen's 'Followed By Thirteen' here: soundcloud.com/jensen-hen-rik/sets/henrik-jensens-followed-by-thirteen-affinity/s-Zb6Ik
The New Album From Forward-Thinking Jazz Quartet
Led By Bassist Henrik Jensen
Double Bass player and composer Henrik Jensen will release his third album Affinity in March, a collection of incendiary tracks performed by his quartet Followed By Thirteen.
Their 2016 album Blackwater received a wide range of complimentary accolades from The Guardian, Evening Standard, London Jazz News and various other influential critics. Affinity is a whole new proposition, generating an emphatic, melodic sound and lyrical flow in celebration of the Double Bass. Building on the work done by other great bass band leaders like Dave Holland, Charles Mingus and Drew Gress.
Jensen moved to London from Denmark 20 years ago to study at the Royal Academy of Music and fell in love with the jazz scene in the city. The other members of Followed by Thirteen are Esben Tjalve on piano - a friend from Denmark who studied with Jensen at the Royal Academy - Rory Simmons on trumpet and Pete Ibbetson on drums – both of whom he met in the UK. Individually they work with a number of the biggest names in jazz, regularly touring and making work with Gene Calderazzo, The Puppini Sisters, Jamie Cullum and Nostalgia 77.
Followed By Thirteen is an ensemble of musicians at the top of their game and who deeply respect each others individual merits and sensitively represent each part. They create a disci-plined, measured structure around which Simmons, Tjalve, Ibbetson and Jensen all take turns interpreting the theme of the song. The result is a measured, evening jazz album that has an international feel. Tracks like Chaoyang Park and Darvin transport the listener from a jazz club in Chicago to the reaches of the Far East within minutes.
Historically, Followed by Thirteen is a band lead by their heart – their first album Qualia was dedicated to Jensen’s mother who died in the years leading up to the recording. Affinity is no different, the whole album is an earnest celebration of his aunt Jyta Peterson who passed away recently. Within the album Four for a Boy is dedicated to his new-born son with Gentle Giant a dedication to his late friend and esteemed pianist Paolo Losi.
Artwork for their new album is created by the talented fine artist Aurélie Freoua, created live during a solo bass performance at the Vortex Jazz Club in September 2019. The resulting piece and methodology has obvious parallels with the work of Wassily Kandinsky and the Bauhaus Movement.
Affinity will be released on Babel, a label revered for its uncompromising approach and a proven track record in A&R, responsible for championing the likes of Polar Bear, Portico Quartet and many other great artists.
LIVE DATES (UK):
The Whiskey Jar, Manchester // 24th February
Flute and Tankard, Cardiff // 25th February
The Be-Bop Club, Bristol // 28th February
Vortex, London [Official Album Launch] // 3rd March
LIVE DATES (Denmark):
Erlings, Århus Denmark // 19th February
Erlings, Århus Denmark // 20th February
Frederiksberg bryghus, Copenhagen // 22nd February.(1pm)
Galathea Kroen, Copenhagen // 22nd February. (Eve)
Listen to Affinity by Henrik Jensen's 'Followed By Thirteen' here: soundcloud.com/jensen-hen-rik/sets/henrik-jensens-followed-by-thirteen-affinity/s-Zb6Ik
For more information, please contact Dynamic Agency: +44(0)7825279574 / chris@dynami-cagency.co.uk / dynamicagency.co.uk