ALL THERE, EVER OUT 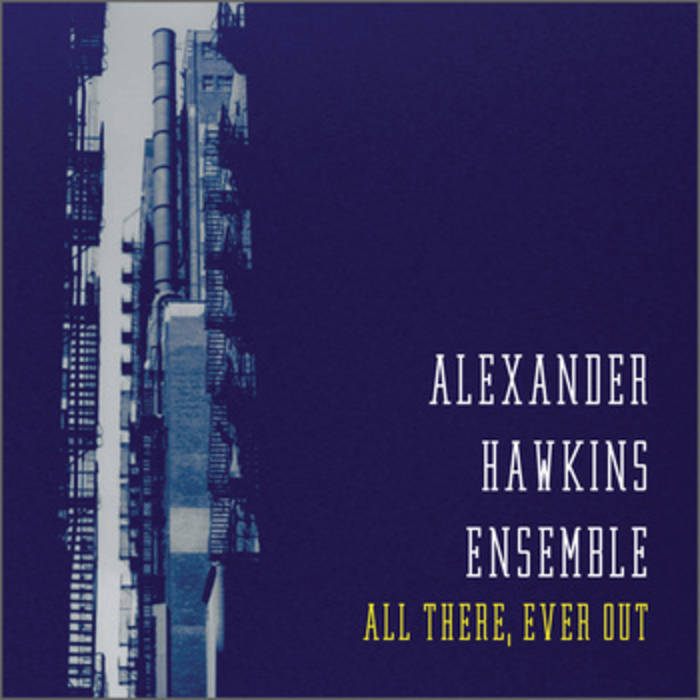 The 30-year-old pianist Alexander Hawkins is the fastest emerging voice of his generation in the field of contemporary experimental UK jazz. Although he may be frequently bunched in with the various avant jazz/ improv scenes in this country, his music is beginning to also have more widespread appeal. Mentioned by four journalists in Jazzwise Magazine’s ‘who to look out for in 2010’ feature, word has spread of his various unique ensembles but none more so than this UK six piece. Featuring a young band of Otto Fischer on electric guitar, Hannah Marshall on cello, Dominic Lash on double bass, Javier Carmona on drums and percussion and the elder statesman of the crew Orphy Robinson on marimba, All There, Ever Out is the band’s second album, recorded for the Babel Label. The debut No Now is So was according to leading international archivist Francesco Martinelli in Point of Departure, “...one of the best discoveries of the Year” and Hawkins has also received plaudits for his Transatlantic Convergence Quartet (that also features bassist Lash as well as Anthony Braxton sideman Taylor Ho Bynum; the Hammond organ trio Decoy (‘redefines the words ‘shock and awe,’’ says Jazzwise); and for his stand out contributions to both Evan Parker’s trio through to the bands of Louis Moholo-Moholo and Mulatu Astatke.

On All There, Ever Out, Hawkins reveals how he is able to navigate between his free improvising spirit and a composer’s sense of architecture. As an artist he’s in a unique place: between the pre-bop traditions of Ellington and Tatum, through to Thelonious Monk and into the more ‘out there’ terrains of pioneering pianists-composers such as Paul Bley and Cecil Taylor. Add to that a wide spectrum of contemporary classical music, post-downtown New York jazz and underground rock that to create a fascinating brew that reveals an original artist who is thoroughly contemporary, but with a spirit and passion that’s entirely beyond the era of post-modern self- conscious irony.

“I think I’ve realized that having a stronger compositional voice doesn’t necessarily diminish the voice of the people playing the music…and in fact, that the opposite is sometimes true: that having a stronger compositional voice can showcase the individuality of the performers in a stronger light. I love the way that guys like Cecil, Wadada, Threadgill, Anthony Davis, Leroy Jenkins, Braxton, and Duke etc. have a compositional voice which is in many ways one and the same as their improvisational voice…” Throughout the recording, the ensemble acts as a palette of expansive light and shade, of fragments merging into unisons, the only concern being the expression of the whole. Hawkins also reveals some inspiring solo piano in the prelude to the track ‘Elmoic’, while on the track ‘AW/LJ’ Hawkins shows his creativity on B3 organ in a band serving up a Miles-like bitches brew punctuated by his splintered blues-driven organ grooves. Hawkins’ unique B3 organ playing has too been noticed, receiving an entry in the 75th Annual Downbeat Reader’s Poll in the organ category while also being named as, “the most interesting Hammond player of the last decade and more, [he] has already extended what can be done on the instrument.’ by the Penguin Guide to Jazz on CD editor Brian Morton.

ALEXANDER HAWKINS is a pianist, organist, composer and bandleader who is self-taught, he works steadily in a vast array of creative musical contexts. In 2010, Hawkins featured on the official ballot for the 75th Annual Downbeat Reader’s Poll in the organ category. Writers in the Spanish journal El Intruso voted him #1 in the keyboard category, and #5 in the piano category, in their 2010 poll. His own highly distinctive soundworld is forged through the search to reconcile both his love of free improvisation and profound fascination with composition and structure. Hawkins’ main vehicle as bandleader is his Ensemble. One review of this group’s debut record, No Now Is So (FMR Records), wrote of ‘such absolute joy and strength...an incredible record’ (Clifford Allen, Bagatellen). The album featured heavily in top ten albums of 2009 lists on both sides of the Atlantic.

Showcasing his commitment to collaborative music making, Hawkins also co-leads two prominent ensembles. The Convergence Quartet features American Taylor Ho Bynum, Canadian Harris Eisenstadt, and Dominic Lash from the UK. Their first album placed in various top ten albums of 2007 lists, with Stuart Broomer in Point of Departure writing of ‘a fundamental reassertion of composition within improvised music’. Their second album, Song/Dance (Clean Feed, 2010) has been enthusiastically reviewed in the UK, US, Canada, and throughout Europe.

Decoy is a trio in which Hawkins plays Hammond Organ. Receiving race reviews, The Guardian’s John Fordham highlighted the potential for a ‘cult following’. The trio also performs, and has recorded with, US
saxophonist Joe McPhee. An in-demand sideman, Hawkins continues to be heard with vast array of contemporary leaders, such as Evan Parker, Louis Moholo-Moholo, Wadada Leo Smith, Mulatu Astatke, and Sonny Simmons. Concert appearances have taken him to club, concert and festival stages throughout Europe and beyond. His music has been broadcast extensively on BBC Radio, as well as in Europe and beyond. National Public Radio in the United States featured him in a 2010 ‘5 Young British Jazz Artists to Watch’ piece, whilst he also appeared on France Musique as one of five artists representing ‘la nouvelle vague du jazz anglais.’ He also appears both as a
specialist interviewer and interviewee for the BBC.

JAVIER CARMONA is a drummer and percussionist from Madrid (now settled in Barcelona after seven years in
London). He is very active in the European free improvisation scene, and has performed with musicians such as John Tchicai, Evan Parker, Carlos Zingaro and John Russell, among many others. He is a member of several groups, and also collaborates with dancers Rosa Aledo and Saija Lehtola in Kicking Louis & Co., a dance company which has presented work in France, Cyprus, Spain and England. carmonajavier.wordpress.com

Unique guitarist OTTO FISCHER, also known as a highly individual songwriter (indeed, Derek Bailey released his first album, Songs, on his ‘Incus’ imprint), has performed with a variety of top musicians, both from the UK and the US. His completely individual style led to him being dubbed ‘a sort of digitized electric griot’ in a review of a recent performance at New York's ‘Stone’.
www.ottofischer.com

DOMINIC LASH is a freely improvising double bassist, although his activities also range much more widely. Now based in New York, from his native Oxford, he has performed with musicians such as Tony Conrad (in duo and quartet formations), Joe Morris (trio and quartet), Evan Parker (duo, quartet and large ensemble) and the late Steve Reid. His current projects include The Dominic Lash Trio, The Set Ensemble (an experimental music group focused on the work of the Wandelweiser collective), The Convergence Quartet with Alexander H, a trio with John Butcher and John Russell and duos with Patrick Farmer and with Nate Wooley. www.dominiclash.co.uk

HANNAH MARSHALL is a cellist active within improvised music in London and Europe, playing with, amongst
others, 'Zinc' with Roger Turner and Tim Hodgkinson, and string trio 'Barrel'. She also works internationally with Luc Ex's and Veryan Weston's groups SOL6 and SOL12, in a trio with saxophonist Gianni Mimmo and pianist Nicola Guazzaloca, and Swiss duo 'diatribes'. www.hannahmarshall.net

ORPHY ROBINSON is one of the major figures of the jazz scene - he has released records on Blue Note and played with Don Cherry, David Murray, Henry Threadgill, Courtney Pine, the Jazz Warriors, Andy Shepherd, and many others. He has composed for Film and TV- including “In answer to your question” for the Balanescu String Quartet and “42 Shades of Black” for Phoenix Dance Theatre, which was performed at the 1996 Olympic Games in Atlanta. He currently leads the groups Codefive and Nubian Vibes. orphyrobinson.blogspot.com