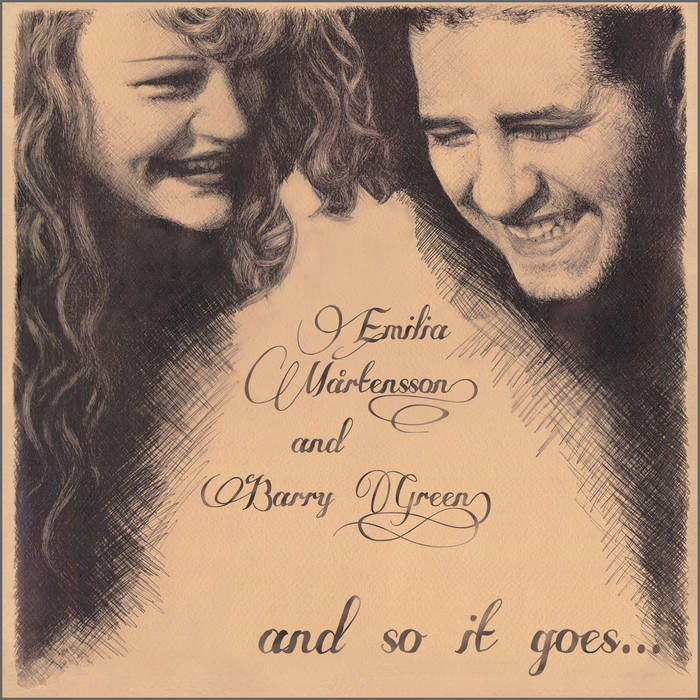 And So It Goes… is the debut album from Emilia Mårtensson and Barry Green. The album documents the duo’s shared love of a wide range of material, presenting fresh and exciting arrangements of a superb choice of songs. Drawing on the wistful folk songs of Emilia’s homeland alongside some of the greatest songs of the last century, the recording is a finely poised blend of jazz and artful alt-pop. “The album consists of 11 very carefully selected songs” says Emilia, “The main idea behind this project has been to treat repertoire by artists we love, with an approach that has been filtered through our different jazz influences and backgrounds. On the album you'll hear a Swedish folk song sung in a southern Swedish accent; an original piece based on Schumann’s “Ich Grolle Nicht”; a Nat King Cole Swing tune, and a James Taylor tune dedicated to my younger sister Marina, just to name a few”.

Other guests on this largely voice and piano recording include cellist Ben Davis appearing on a Peter Gabriel tune, Julian Siegel on bass clarinet on an Egberto Gismonti composition and drummer John Blease appears on the album’s only original. Other composers to appear on this wonderfully unconventional collection is Billy Joel (one of the album’s stand-out tracks, And So It Goes’) Kenny Kirkland, Esbjőrn Svensson, and Paul Simon who’s Me and Julio Down by the Schoolyard receives a marvellously imaginative solo piano rendition from Green.

And So it Goes is an outstanding recording by two lovers of great songs. It’s pared down simplicity, intimacy and poise, is refreshing and belies great rapport between two of the UK’s finest musicians.

Unlike most of today’s singer songwriters, Emilia Mårtensson's teenage years were not spent exploring the catalogues of Dylan, Waits, Young and Drake, rather, her evenings were spent listening to Ella Fitzgerald, Billie Holiday and Anita O’ Day in the depths of Southern Sweden's countryside where she lived. While her girlfriends listened to popular styles of the day, she and a group of local boys were playing music in her parents restaurant which Emilia would later turn into one the regions most successful jazz clubs hosting some of the country's most acclaimed jazz acts.

Fast forward 10 years and Emilia Mårtensson is a London based singer of considerable repute. Her critically acclaimed contributions (both as vocalist and lyricist) to jazz’s newest stars, Kairos 4Tet no doubt helped them bring home a 2011 MOBO Award, while her distinctive voice led the Observer to claim her 'The New Face of British Jazz 2012'.

For sure, the jazz vocal legends inform Emilia's approach, yet it is the Swedish folk songs of her country that underpins who she is. Her pure, clear toned intimate voice, at times deeply soulful, at others ethereal, blur the lines between folk and jazz.

Five years ago, Emilia was introduced to pianist Barry Green who was looking for a 'special' vocalist to accompany him on a gig. Like Emilia, Barry is a young player relatively new on the scene. Once described as one of the UK’s best kept secrets – his CV as accompanist is a Who’s Who list of the upper echelons of UK jazz – his 2011 debut, The Music of Chance, put paid to that notion earning him a raft of media plaudits. “A cerebral swinger with a liking for unexpected harmonic turns” said The Independent, while the Guardian cited him as “one of the best mainstream-to-bop musicians on the UK scene”. Green is a sparkling player, versatile with oodles of imagination. So, as a lover of melody, yet occasionally edgy there is no surprise that the rapport between him and Emilia was instant, both sharing a deep love of the ‘art of the song’.