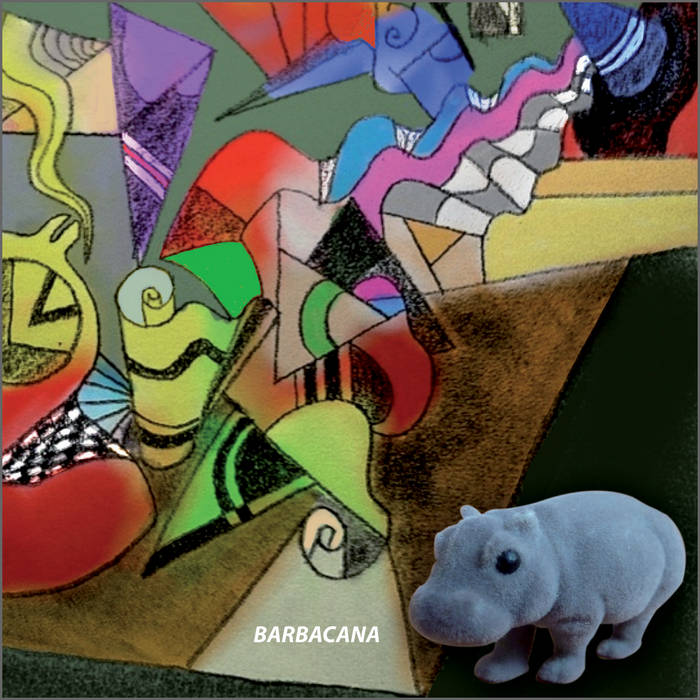 Barbacana is an Anglo-French quartet that brings together some of the keenest young musical intelligences from either side of the channel: British firebrands James Alsopp and Kit Downes and rising French artists Sylvain Darrifourcq and Adrien Dennefeld. Since 2009, they’ve been stunning live audiences with their barbed, angular riffs and hive-mind extemporisations.

The self-titled debut album, Barbacana, is a bristling summation of all their group discoveries to date, hinting at both the long history of avant-garde jazz shared by artistic communities in Paris and London, and the love French audiences and musicians have long held for classic British Prog and jazz-rock groups such as Soft Machine, Matching Mole and Hatfield and the North.

‘Animation’ starts with a Beefheartian tangle of robotic, interlocking guitar and organ jabs, squirling sax, and piston-popping, fractured drum rhythms, before giving way to a mysterious, dreamy coda. ‘Steam; sets off into a murky investigation of bass clarinet and low organ rumbles, smeared with Bill Frissel-like guitar sighs, until diving into a prancing, organ-led riff reminiscent of Canterbury-scene Prog at its most gripping. ‘Migration-Big Big Shop’ rushes out of the gate with gnarled, barbed-wire guitar, and twitchy, caffeinated drums only to tumble headlong into turbulent free-fall with wide, endof-the-pier organ swells opening out like a queasy parachute.

Imagine strapping yourself into a fairground ride that keeps changing direction, switching from rollercoaster to ghost train and back again with capricious wit and skill.

With Barbacana, the only certainty is that nothing is certain.

In 2001, classically trained percussionist SYLVAIN DARRIFOURCQ, released his debut album, Vie de Henry Brulard, with his group L’Egotiste. He formed, in 2004, the Emile Parisien quartet (who have released three albums) and, more recently, the free-jazz-rock trio, Q. He has also played with Michel Portal, Marc Ducret, Andrea Parkins, and others.

Guitarist and cellist ADRIEN DENNEFELD has performed at clubs and festivals all over the world, from France to Norway, India to Canada. He takes part in many improvised meetings and new multimedia creations involving photography and film, regularly participates in projects with theatre and dance companies, and composes film music.

Reeds-man JAMES ALLSOPP came to public attention around 2007, leading post-jazz outfit, Fraud. He leads, and has made two albums with, The Golden Age of Steam. He works regularly with the Kit Downes Quintet, Nostalgia 77, World Sanguine Report, is a co-leader of the art-blues trio Snack Family, and has played with Django Bates, Polar Bear, and others.

Keyboardist KIT DOWNES plays regularly with his own Trio and Quintet, Stan Sulzmann’s Neon, Troyka, The Golden Age of Steam, Julian Arguelles Quartet and Seb Rochford. He has played with Django Bates, Lee Konitz, and many others, and performed with leading British bands including Fraud, Asaf Sirkis’ Inner Noise and Acoustic Ladyland.