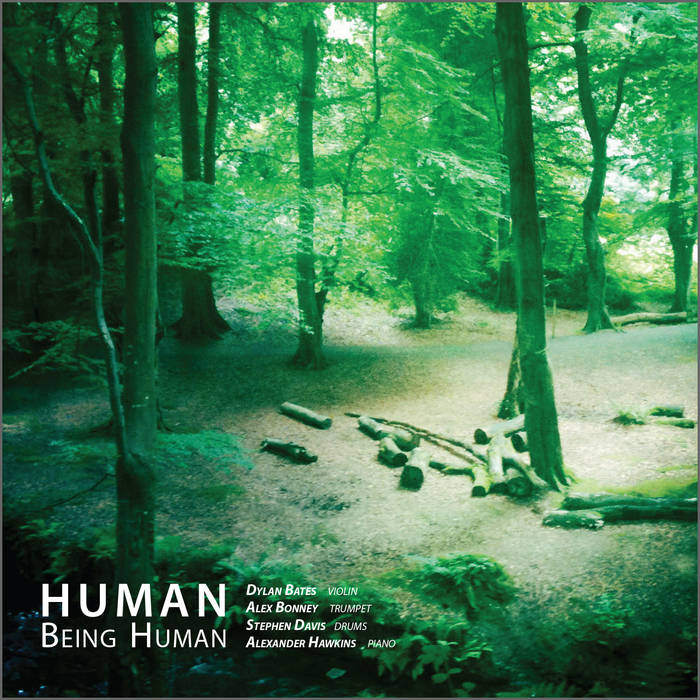 Human is the new world-class quartet assembled by Irish-born drummer and composer Stephen Davis. For this exciting new project, he’s joined by three of the most creative young artists on the UK left-field jazz and Improv scene: Alexander Hawkins on piano, Alex Bonney on trumpet and Dylan Bates on violin.

The quartet is notable for its unusual instrumentation. Davis comments ‘It was important to me to work without a bass as I wanted to highlight some of the sonorities from the drums and piano that can get lost with a bass.’

With no bassist occupying the low-end, the music on the debut album, Being Human, feels like a crisp, tottering house of cards, ready to tumble at any time but held up by its own irrefutable sense of natural logic.

In style and spirit, the music on Being Human is inspired by – and pays tribute to – the early masters of free jazz. But you’ll find no museum pieces here. This is vibrant, brash and lively free music, viewed from a fresh, 21st century perspective. It’s a challenge this stellar band is more than capable of meeting.

Elsewhere, tracks like ‘Frozen Goat’ and ‘Vinilla Life’ show how adept the quartet is at weaving in and out of the moment, sliding from Davis’ composed motifs to joyful, free-form abandon in the blink of an eye.

It’s the kind of preternatural interplay and instantaneous musical communication you’d expect from four musicians of this caliber. More than that, it’s a ready-made modern classic of avant-jazz.

Irish drummer and composer, Stephen Davis, is best known as one third of the trio Bourne/Davis/Kane. Over the years he has also played with many heavyweights, including Evan Parker, Joe Morris, Django Bates, Paul Dunmall and Mark Ribot. In 2013, he was nominated for the Paul Hamlyn Award for Composers.

Pianist, organist, and composer, Alexander Hawkins is one of the most creative voices in contemporary music. He leads his own Ensemble, co-leads The Convergence Quartet, and plays Hammond organ in the trio Decoy. He also plays with Louis Moholo-Moholo, as part of the Louis Moholo-Moholo Unit, and in duo.

Alex Bonney plays trumpet and laptop. He leads the Alex Bonney Trio and co-leads a variety of projects including Splice, electro acoustic trio Leverton Fox, and an improvising duo with bassist Dave Kane. As a sideman, he plays with World Sanguine Report, Golden Age of Steam, Nostalgia 77 and others.

Multi-instrumentalist Dylan Bates is a member of Bitten by a Monkey and the Flea-Pit Orchestra, and has worked with Billy Jenkins, Crass, Comus, Brian Irvine, Oren Marshall and Evan Parker, among others. His septet, Waiting on Dwarfs, has boasted several of the London jazz scene’s finest musicians over the years.