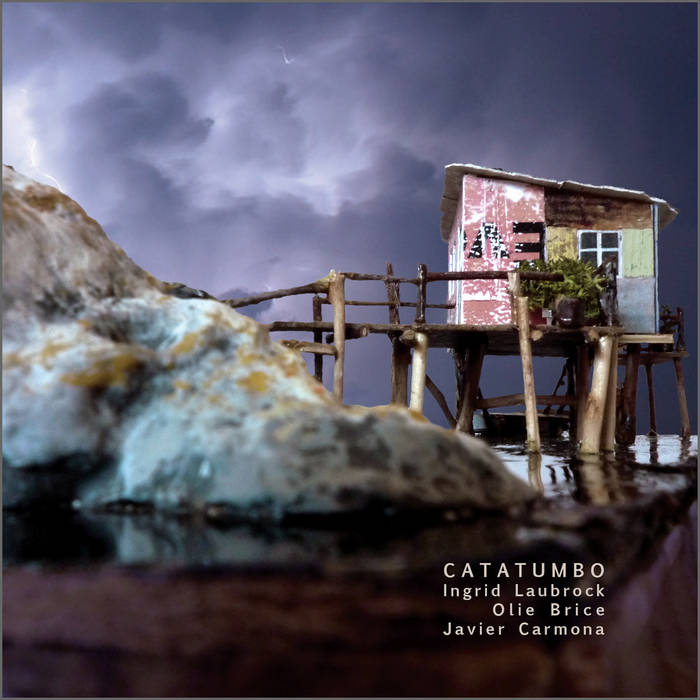 Ulrich Jonas Every group of Ingrid Laubrock is different. This shows another aspect of her artistry.

Exploring an endless textural palette beyond the boundaries of tonality, conventional rhythmic organization and preconceived notions of what experimental jazz should sound like, Catatumbo is a trio right at the cutting edge of the contemporary avant-improv scene. Featuring the German-born, former London, now Brooklyn-based original F-IRE Collective tenor/soprano saxophonist Ingrid Laubrock; the now Barcelona-based young drummer/percussionist Javier Carmona who is one of the movers and shakers in the free improv field, and another ex-London resident; and young double bassist Olie Brice who currently has deep roots in both the new and old avant scenes in London. Although each of them offers very diverse musical backgrounds, there’s an energy and intensity characteristic of these musicians that creates a lot of empathy in the music they create on their new self-titled debut, recorded for the Babel label.
Formed in 2009, having at first toured the London improv scene in venues such as Flim Flam, the Klinker and the Oxford, Catatumbo furthered a strong group understanding through tours of the UK in November 2010 and Spain in February 2011. The three personalities gel emphatically on ‘Catatumbo’, recorded live at the Vortex in November 2010 and extremely well recorded by LOOP Collective trumpeter and dedicated studio producer Alex Bonney. Saxophonist Ingrid Laubrock has made a name for herself in New York recently, playing and recording frequently on the avant-jazz scene with such significant cutting edge underground artists as Weasel Walter, Trevor Dunn, Mary Halvorson and drummer Tom Rainey. On ‘Catatumbo’ she imaginatively deploys an extremely wide arsenal of resources from the extended free improv sax vocabulary as well as one that skates the outer limits of free bop, shifting easily on the recording between Albert Ayler-type skronk through playful dance rhythms to longer, more pensive tonal colourings. On an impulsive, volatile set that blurs the lines between group composition and improv, Olie Brice’s beautifully rounded double bass sound, sometimes played arco, is always bold, alert, ready to either respond or initiate while Carmona - who duos with the unique young tenor saxophonist Mark Hanslip on another new avant-jazz Babel recording ‘Dosados’ - adds a forceful polyrhythmic edge, partially drawn from a background playing in underground rock

Originally from Germany, INGRID LAUBROCK moved to the the UK in 1989 but in more recent years has settled in Brooklyn, New York. She has performed and recorded with: Kenny Wheeler, Tim Berne, Mark Helias, Michael Formanek, Mary Halvorson, Tyshawn Sorey, Evan Parker, Steve Beresford, John Edwards, Norma Winstone, Veryan Weston, Luc Ex,Django Bates’ Human Chain, Evan Parker, The Continuum Ensemble and many others. As an original member of London’s pioneering F-ire Collective at the end of the 1990s, she won the BBC Jazz Award for Innovation in 2004, was nominated for the BBC Jazz Award for ‘Rising Star’ in 2005 and won a Fellowship in Jazz Composition from the Arts Foundation in 2006. She also won the 2009 SWR German Radio Jazz Prize and was one of the final nominees for the 2009 Westfalen Jazz Preis. Aside from Catatumbo, her current groups are Sleepthief with Tom Rainey and Liam Noble who have released 2 CDs, her brilliant NY based quartet Anti-House and two-piano nonet Nein, Ingrid Laubrock Quintet and ‘Paradoxical Frog’, a co-led trio with pianist Kris Davis and drummer Tyshawn Sorey.

Brought up in Madrid, the drummer-percussionist JAVIER CARMONA spent seven years in London before moving to Barcelona in 2011. He was a regular fixture on the London free improv scene, collaborating with Alexander Hawkins, Tony Bevan, John Edwards, Orphy Robinson and London Improvisers Orchestra among others. He has played in several rock bands from Madrid and in free Jazz situations has appeared with San Francisco saxophonist and composer Alex Weiss (Gallopinto), as well as his collaborations with different musicians on the Spanish jazz scene such as Francisco López (Loque) and Carlos Rossi. He recently has started playing with Japanese pianist Tsukiko Amakawa in a duo project with a recent performance during the international festival of improvised music in Madrid.

OLIE BRICE is an improv / jazz double bassist, based in London. He leads the Olie Brice Quartet (featuring tenor saxophonist Mark Hanslip , pianist Leon Michener and US drummer Jeff Williams) and The Carracks Project (with reedsman James Allsopp, trumpeter Nick Malcolm, laptop artist Alex Bonney and drummer Mark Sanders). Aside from Catatumbo, he is involved in several other bands and projects including a duo with flautist Neil Metcalfe; ‘The River Loam Trio’ with Mikolaj Trzaska and Mark Sanders; and ‘BABs’ with James Allsopp and Alex Bonney. Brice is also a sideman for a number of bands including the Nick Malcolm Quartet, Leon Michener Trio, Loz Speyer’s Inner Space Music, Gail Brand Sextet and Alex Bonney Trio. He has appeared with Evan Parker, Paul Dunmall, Louis Moholo-Moholo, Ken Vandermark, Tony Marsh, Lol Coxhill, Pat Thomas, Mulatu Astatke, Alan Wilkinson, Hannah Marshall, Steve Reid and Steve Swell, among many others. Brian Morton, editor of the Penguin Guide to Jazz said that, “Brice makes the entire body of his bass sing. He has the ability to deliver a fractal line that is as purposeful as any by the great jazz bassists, but to do so within an entirely abstract setting”.