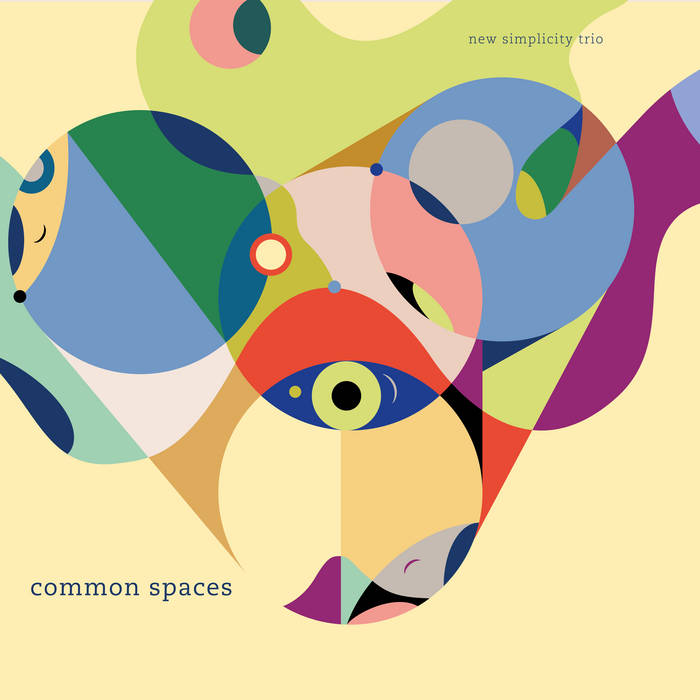 Konstantin Khomoutov Strikes a very good balance between being easy to listen and being intricate to be enjoyable for a demanding listener. Favorite track: COMMON SPACES.

Common Spaces by New Simplicity Trio is a powerful statement of musical commitment to groove and melody. These are tunes that will be whistled and hummed.

Something of a rarity on the contemporary UK and European scene amongst younger players, the trio of Heinen, Jensen and Fusco focus on melodic and harmonic simplicity. That approach has given space for every stroke or touch to stand distinct, achieving a fine balance of tension and grace on Common Spaces and between the 3 players.

New Simplicity Trio formed in 2014, with the addition of Danish London-based double bassist Henrik Jensen to the long-standing and deep collaboration between Italian drummer Antonio Fusco and the British pianist Bruno Heinen. Their approach is rooted in the ideas initially put forward by the Evans/La Faro/Motion trio of a collective and equally voiced group, but with a contemporary compositional perspective, with contributions from each of the trio.

The group’s name was inspired by the post serial movement of late 1970’s contemporary classical German composers who rejected the complexity of serialism and other avant-garde practices. They instead composed memorable melodic and harmonic compositions, seeking an immediacy and clarity of communication with their audiences.

BRUNO HEINEN is a London based contemporary pianist, composer and bandleader. Bruno has released four records on the forward looking Babel Label ('Twinkle Twinkle', 'Tierkries', 'Postcard to Bill Evans' and 'Changing of the Seasons) and a solo CD is due to be released in the coming year. Bruno has performed in festivals including the Shanghai World Music Festival, the London Jazz Festival, the Cork Jazz Festival, Inntöne Festival Austria and the Rest Is Noise. He has had his music played on BBC Radio 3, BBC6 Music, BBC Scotland, in Austria, Canada, and the USA, as well as giving live broadcasts and interviews for the BBC. Bruno has been nominated for the Paul Hamlyn composers’ award and he is currently researching towards a practice-based PhD at the RNCM which is funded by the AHRC.

HENRIK JENSEN came to London from Denmark in 1997 to study electric bass at The Musicians Institute. He later transitioned to the double bass and became a student at the Royal Academy of Music on the jazz degree. Jensen's rich bass tone has worked all over world from the Blue Note in Tokyo to concert halls in Moscow while still keeping busy on the London jazz scene where he has also been laying the bass lines down with artists including Pete Wareham, Elizabeth Shepherd, Martin Speake and Billy Jenkins. Jensen formed ‘Followed By Thirteen’ in 2010 and has a close working relationship with saxophonist Peter Ehwald from Berlin. He is also a part of The Mauricio Velasierra Group and for the last 9 years has also been working with The Puppini Sisters, with whom he has toured internationally and recorded for major label Verve, UMG.

ANTONIO FUSCO is one of the most original drummers of the European Jazz scene, currently involved in various European projects including Giovanni Falzone Contemporary Orchestra, Tino Tracanna Acrobats, No Pair, Reem Kelani Band, and Followed by Thirteen. In 2011 he founded the project - Antonio Fusco Sextet- “Suite For Motian” and in the 2014 it was released with the Italian label Auditorium Parco Della Musica Records. He has played with Tim Berne, Paolo Fresu, Tino Tracanna, Paolino Dalla Porta, Francesco Bearzatti Tinissima 4et, Antonio Zambrini, Andrè Canniere, Esben Tjalve and he's part of several projects between Germany, Italy, China and UK. In 2017 he has been engaged to joint the “ALBORAN Trio”, a historic jazz trio, founded from the Italian pianist Paolo Paliaga and the bassist Dino Contenti with whom he is working at the new album.

Guests John Beltran and Kim Myhr walk us through their magical musical adventures.