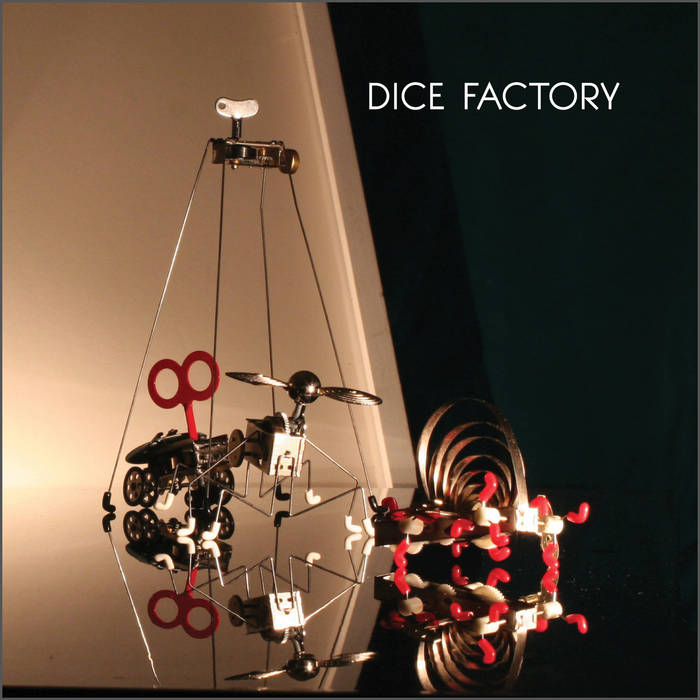 The band name Dice Factory was chosen as a result of a fascination with author Luke Reinhardt’s cult classic novel The Dice Man in which decisions made by dice rolling determine structural events which are then lived through for periods of time. Says saxophonist and composer Tom Challenger, “the name really came from this environment, and a very self-inflicted, heavy workload with the aim to getting into the music, where, within a lot of seemingly chaotic music, harmony and rhythm is a serious amount of structure. Chaos, chance, numbers, structure, work ethic”. These are the principles at work here. Challenger by name as well as nature, the saxophonist-composer explains how, “rehearsal and discussions about the music were very long but nailing the music was paramount, coming even before approaching live work.” Although this at first might appear an ascetic, cerebral way of making music, the self-titled Dice Factory is a surprisingly lyrical and visceral recording. Newly released on the Babel Label, the quartet tests Challenger’s concepts by altering relationships within the group sonic as well as a treatment of rhythm, meter and harmony that’s unconventional.

Set to become a vital cog in London’s experimental jazz and improv scene, Dice Factory started life in 2009 as a jam band when the pianist George Fogel and saxophonist Tom Challenger got together to play transcriptions of music that ranged from alt rock band Deerhoof to vanguardist NYC pianist Vijay Iyer. They then started developing a way of linking them with their own compositions plus those of the other members, the highly rated young bassist Tom Farmer and drummer Jon Scott. This group of key young musicians are already giving shape to the creative direction of a new jazz generation absorbed by culture and arts as a whole: tenor saxophonist Tom Challenger is a LOOP Collective member and leader of unique jazz-electronica group MA as well as saxophonist for Babel recording band Outhouse; Tom Farmer is the double bassist for award winning quartet Empirical; drummer Jon Scott (who according to Challenger has a “ridiculous ‘binary’ brain”) features in MOBO Jazz award winners Kairos 4tet, and pianist George Fogel is a member of MA and other key upcoming bands such as the trumpeter Andre Canniere Group.

A strong writing partnership between Challenger and Fogel (with Farmer also chipping in), Dice Factory’s unwritten concept comes down to a devotion to exploring and discovering new and challenging methods of interlacing composing and improvising. Challenger’s input especially, reflects a patient absorption of electronica into the world of acoustic improv music and NY downtown jazz - as well as being a member of Red Snapper, Challenger’s music has been shaped by bands such as Boards of Canada and Norwegian avant-jazz-noise band Supersilent. ‘Gooch’ is an example, opening with a thrilling digitally-inspired sparse groove of prepared piano (one element in keyboardist Fogel’s wealth of resources) and staccato sax overtones anticipating Jon Scott’s broken beat, the tricky meters a characteristic of the shifting, polyrhythmic pulse of the album. Harmony becomes another testing ground for Dice Factory, and compositions are mostly based on intervallic structures as a result of numbers and systems used in the writing processes. On Fogel’s ‘Heyu Nantucket’ Challenger’s cyclical sax exploration sounds Henry Threadgill-like and while ‘Saribund’ starts typically with a infectious groove, ambient soundscapes come into play too and Challenger’s more mournfully meditative tonal inflections (also heard throughout the album) makes for a beautifully lyrical section that avoids any of the typical Euro-jazz clichés.

TOM CHALLENGER played in school ensembles and local R’n’B bands growing up in Huddersfield and it was in this type of environment that he started to develop his interest in improvisation and other kinds of creative music. In 2001, he moved to London to attend the Guildhall School of Music and Drama, from where he graduated with a first class honours degree. A member of the LOOP Collective Challenger is a member of leading Collective band Outhouse, and composer been described by Jazzwise as ‘mature beyond his years’. His main band as leader Ma began working together in 2006. Initially a trio (Tom Challenger - Saxophone, Dave Smith - Drums, Ross Stanley - Organ), they met (along with future member Matt Calvert - Electronics) at Music College in 2001. The first release Jyketie was followed by the unique jazz-electronics recording The Last in 2011 which was released to considerable critical acclaim, a big inspiration being a set the band played with former Loose Tubes percussionist turned digital sounds whiz kid Steve Arguelles. A new Ma album is due later this year.

GEORGE FOGEL was born in London and was exposed early on to jazz through family and friends, when 16 his quartet won the music for youth competition at the QEH and went on to play at the RAH with a prize for composition. He attended Junior Guildhall School of Music from 14 under the wing of Martin Hathaway and went on to get a scholarship to study there for a B(mus) in 2001. He took a year from the course to study on scholarship at Berklee College of music under Lazlo Gardony and then returned to GSMD, studying piano with Simon Purcell and John Taylor, where he graduated in 2006 with a first class honours degree. He works regularly with members of London’s F-IRE and Loop collectives, and has appeared with well known names as George Garzone, Phil Robson, Soweto Kinch, and Sebastien Rochford, and in projects by upcoming artists Phil Donkin, Mike Chillingworth, George Crowley to name a few. Through 2008-2011 he was a member of MOBO Award winning ensemble ‘Empirical’, and appeared as featured artist on their latest album 'elements of truth'. He can be heard on albums by John Randall and Andre Canniere, leads a five keyboard ensemble with Tom Rogerson (Three Trapped Tigers) and Mercury Nominee Kit Downs, and inspired by lessons with Vijay Iyer, has a trio with Daoud Merchant and Tom Farmer. He is also active as an educator, giving workshops at GSMD, and was asked to be artist in residence with Empirical at Trinity College of music. A subsidiary interest in writing music for animation and film lead him to embark in an MA in Sound Art practice at LCC. He has received various commissions by production companies working for the BBC and Channel 4. In late 2011 he went to the Far East to pursue field-work in East-West cultural exchange, and during this time performed at venues and hotels in Shanghai and took workshops at Shanghai Conservatoire.

Manchester-born JON SCOTT is the go-to jazz drummer on the scene at the moment. He has been based in London since 2005 and quickly established a reputation as a creative and flexible player on the UK scene, while building up his international connections, playing extensively throughout Europe. Jon graduated with distinction from the Guildhall School of Music masters programme while previously studying for several years with renowned Manchester-based teacher Dave Hassell. Jon has performed with artists including Will Vinson, Julian Siegel, Julian Joseph, Byron Wallen, Nikki Iles, and Mike Walker. He plays in a plethora of original groups including the 2011 MOBO “Best Jazz” award winners Kairos 4Tet, Hannes Riepler’s band, Dice Factory, Rory Simmon’ Monocled Man, and Anglo-German collaboration Paragon (nominated for the 2012 Neuer Deutsche Jazzpreis). Recent releases include a recording as sideman in pianist Bruno Heinen’s Dialogues Trio album Twinkle Twinkle and Andrea Di Biases’s eponymous album Oltremare Quartet, both on the Babel Label. As well as the usual London venues, Jon tours the UK and Europe regularly. Festival appearances include the London, Copenhagen, Manchester jazz festivals, ELBJazz (Hamburg).

TOM FARMER was born in Bristol, 7th June 1984. He took his first Piano lessons aged 4. After moving to Maldon, Essex aged 10, he studied piano with Leslie Boyce, working through the associated board graded system to Grade 8. It was at secondary school where, encouraged by head of Music Sally Thompson, Tom’s musical interests developed. A key member of the school music program at GCSE and A Level, Tom was involved in a wide range of musical situations: Accompanying the Choir in both classical and popular repertoire, a member of many instrumental ensembles, and reliable pianist for soloists. It was aged 16, whilst playing with the school Jazz band, then ran by Peter Worth, that Tom first performed on Electric Bass. The regular Bassist was absent and Tom’s ability to read Bass clef meant he was the inevitable substitute. Following the gig, Tom formalised his electric bass studies through lessons with John Bower. Aged 17, Tom attended a jazz workshop run by Martin Hathaway and the Essex Youth Jazz Orchestra. Again, due to an absentee bassist, Tom was invited to play the evening concert with the orchestra and subsequently to becoming a long term member. During his time with EYJO, Tom had his first exposure to the Jazz tradition. Through Martin Hathaway, he undertook considerable listening and reading to develop knowledge of Jazz Harmony and style. Following a successful tour to Belgium with the Orchestra, Tom was offered an Audition for the Bmus Jazz option at the Guildhall School of Music and Drama. Tom was accepted onto the course with the condition he transferred to Acoustic upright bass during the first year. Under the tutorage of Colin Paris (LSO) and Jeff Clyne, Tom developed the basic techniques and understandings of the acoustic bass. His Jazz education was lead by Martin Hathaway, Simon Purcell and Steve Watts. The 4 year GSMD (2002-2006) course offered Tom an opportunity to become involved in the London Jazz scene. Through his contemporaries at the school, Tom began playing with many ensembles outside the school. These included: The National Youth Jazz Orchestra, The Heritage Orchestra, Lazenby, Kelvin Christiane, Tomorrows Warriors & the highly acclaimed Empirical.