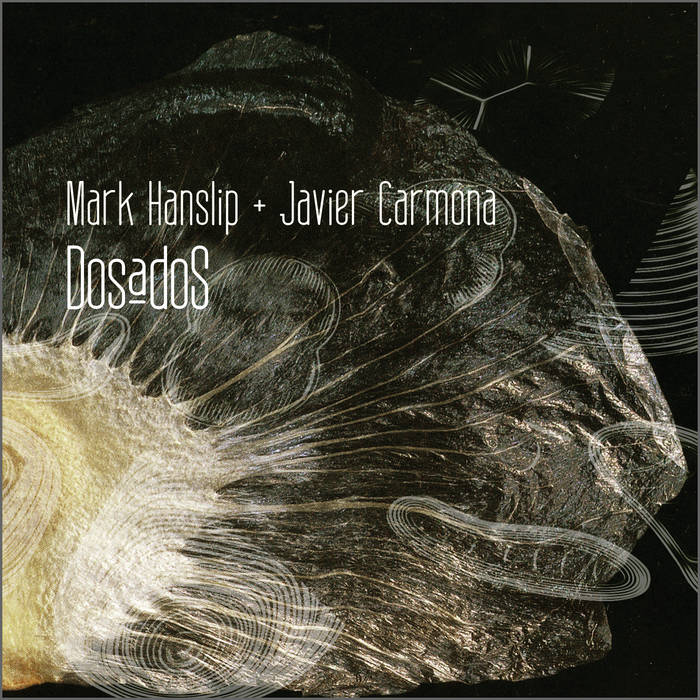 “It's the kind of music that could even make free-improv's sworn enemies say, "OK, now I get it."
-THE GUARDIAN-

“A fascinating record…this duo have created their own little corner of the British improv scene on their first attempt.”
-JAZZ BREAKFAST-


The word 'unique' can be thrown around far too casually in a jazz industry looking around for the next bright young hope. It's not only those making the right noises outside of music making that are creating something that stands out from the crowd though. The fiercely independent 32-year-old tenor saxophonist Mark Hanslip is one such musician. His distinctively wry, conversational approach and molasses-thick, dark-hued, rich tone is one of the most easily recognizable of sax voices on the current scene. His partner on this debut duo recording Dosados on the Babel label, is the young Barcelona, formerly London-based drummer/percussionist Javier Carmona, one of the movers and shakers in the UK free improv field. Carmona though, as with Hanslip, has a diverse background that offers something fresh and vital to the development of free improv. Carmona's forceful rhythmic energy on Dosados attests to his having played in underground rock bands in Madrid as well as jazz. “We met through natural causes,” says Hanslip about the origins of the duo with Carmona. “We had shared mutual friends on the London improv scene, and we just improvised together. I don't recall ever discussing 'influences', although Javier loves Archie Shepp and would often talk about him. If you listen to a lot of improv/free jazz then there might be things that 'DosadoS' reminds you of - some people have mentioned Lou Gare and Eddie Prevost - but really we just let the playing shape the music.” As with Carmona, Hanslip's influences are numerous and diverse, but he has moved closer to the spirit of European free improv in recent years, with his trio TOM-MIX with veteran drummer Tony Marsh and Olie Brice a stand out on the 'new wave' scene in recent years. But Hanslip first came to the attention of the UK left-field jazz scene via the Tim Berne and NY downtown -influenced London four-piece Outhouse. Their eponymous debut on the Babel Label saw him lock horns with tenorist Robin Finker and the offshoot Ruhabi, a widely praised collaboration with percussionists from Senegal that has inspired Hanslip to absorb some of the socio-cultural sonics from Africa into his playing. Outhouse has been one of the main players in the North London LOOP Collective and Hanslip one of its original members. Hanslip has also been a member of Hans Koller's ensemble as well as the Babel quartet Twelves, and it's a strength in diversity: a lugubrious timbre can be reminiscent of early tenor pioneers such as Ben Webster and Coleman Hawkins as much as the extended technique of a Paul Dumnall or Evan Parker through to saxophonists from a more lyrical, boppish tradition such asWayne Shorter. This gives Hanslip a distinct advantage as he presides over melody lines with a consistency and clear narrative within this totally free improv duo set - aside from the Steve Lacy track 'Deadline'. On Dosados, from gently intimate dialogue and avant-ambient mantras the duo heat up to climaxes of darting chattering energy and thrilling moments of quivering tension. Guardian critic John Fordham says as much: “The erudition and resourcefulness of both players gives this ostensibly austere session a rare eventfulness.”


Originally from Runcorn in Cheshire, Mark Hanslip came out of the fertile Birmingham scene in which he played regularly with pianist Steve Tromans and saxophonist Chris Bowden. He was an early member of Hans Koller Ensemble, recording 2 CDs (one with soprano legend Steve Lacy), and shortly after moved to London in 2002 co-founding The Loop Collective. Since then he has appeared on over 30 CDs with groups including Nostalgia 77, Outhouse/Ruhabi, Twelves, Jonathan Bratoeff Quartet and Keith Tippett and bassist Olie Brice's Quartet, and on major International festivals and BBC radio. Since turning his attention back towards purely improvised music he began to play regularly with many of the leading figures on that scene, including flautist Neil Metcalfe, pianist Veryan Weston, drummer Javier Carmona; in the trio TOM-MIX; and also with Paul Dunmall and Mike Hurley in the Midlands. Besides the Hanslip/Carmona duo, he is currently working with the Hanslip/Hurley/Sanders trio, Hanslip is a jazz tutor at Guildhall School of Music and Drama (GSMD) and at Kings College, London (KCL).


Brought up in Madrid, percussionist Javier Carmona arrived in London and has been a fixture on the free improv scene, working and collaborating with Tony Bevan, John Edwards, Orphy Robinson and London Improvisers orchestra among others. He was based in London, but is currently living in Barcelona. He has played in several rock bands from Madrid and in free Jazz situations has appeared with San Francisco´s Saxophonist and composer Alex Weiss(Gallopinto), as well as colaborations with different musicians of the Spanish jazz scene such as Francisco López (Loque) and Carlos Rossi. He recently has started playing with japanese pianist Tsukiko Amakawa in a duo project with a recent performance during the international festival of improvised music Hurta Cordel, in Madrid.

All tracks are improvisations Hanslip / Carmona except track 8, composed by Steve Lacy