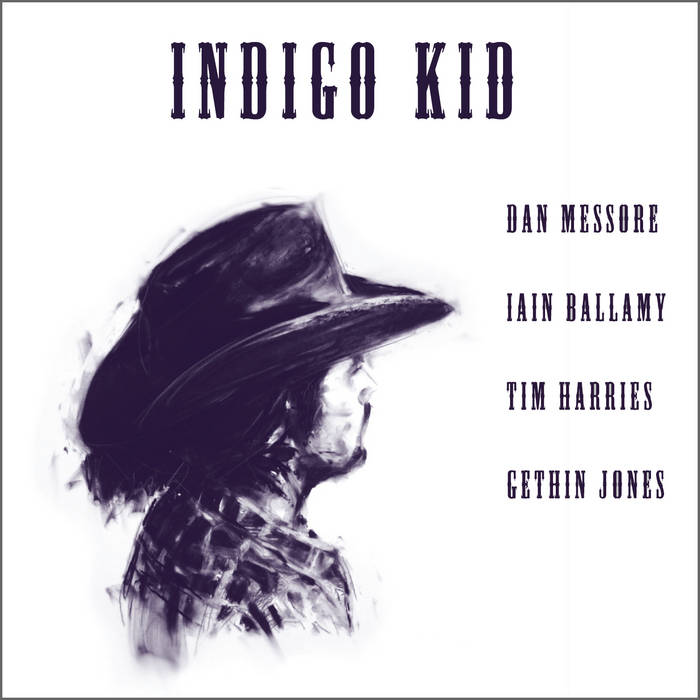 Chris Leonard So I’ve finally arrived at Indigo Kid after a tour through the excellent Michelson Morley, Duski and the nameless band which played the Canteen just recently. Did not hesitate to purchase this album by such a fine and versatile musician who also surfs I’m told. Favorite track: MR LEPARD.

A young musician these days will often form a band with his or her musician friends and peers but miss out on an important old jazz tradition, that of learning from your seniors on the bandstand. Not so the upcoming young guitarist Dan Messore. As with another Babel artist and drummer Seb Rochford who chose the highly regarded ex-Loose Tubes saxophonist Mark Lockheart as a sideman for Polar Bear, it's to the young guitarist/composer Messore's credit, that his right hand man in his quartet Indigo Kid is a mentor and another ex-Loose Tubes sideman, the incredible British saxophonist Iain Ballamy, who has also produced and arranged this eponymous debut recording. Ballamy has reams of praise for the young guitarist who he first met in 2003 while completing his MA in jazz at the Royal Welsh College of Music and Drama. A man after his own heart, Ballamy describes Messore as, "a mature and confident musician with an individual approach to writing and playing.” Besides the Cardiff drummer Gethin Jones, who Messore studied alongside in Cardiff, the guitarist's tender and mesmerizing writing and playing has also attracted the experienced ex-Bill Bruford bassist Tim Harries to the Indigo Kid fold.

It's easy to see why though. As is the norm among Babel artists, Messore is someone who has inherited and absorbed a diverse range of music. On the recording Messore might draw from the sensitive side of post-contemporary fusion where Pat Metheny meets Kurt Rosenwinkel. But Indigo Kid is also filled with the rich folk-rock traditions of a John Fahey and the recently departed Bert Jansch and Messore's sweet folky harmonies and dreamily chiming open chords recall the misty mountain landscapes of Led Zeppelin, as on his composition here 'Mr Lepard'. But jazz is central, with hints of Bill Frisell's Americana on the tender 'Pages to a Friend', and a beautifully intimate rendition of the Gershwins' 'The Man I Love', while jazz fans' hearts are certain to melt to Messore's bossa-like 'New Man New Place' with Ballamy improvising in sumptuous Stan Getz-like mood.

Yet Indigo Kid isn't solely a western music exercise, and his search for cultural roots and their meaning stretches further afield. “Much of my composition comes as a response to nature and surroundings,” says Messore. “I have travelled a fair amount, whilst doing so I always try to get off the beaten track: hitching, sleeping out, working locally. I am attempting to create music that has a strong sense of landscape with improvisation”. On the way he has looked to Africa and its folk music, especially inspired by the gentle rootsy jazz guitar of the unique Benin-born NY-based star Lionel Loueke. And to Brazil, the great Hermeto Pascoal being a subtle but pervasive influence throughout the album. But it's the accessible combination of all these lyrical song-like forms and deeply rooted improv aesthetics that appear throughout these sensual and very striking compositions that this highly gifted guitarist has recorded for his band debut Indigo Kid.

In 2006 DAN MESSORE returned to the UK having studied for a MA in jazz at the Royal Welsh College of Music and Drama in Cardiff, a course headed by bassist Paula Gardiner where he was tutored by such musicians as John Parricelli, Huw Warren (who says about Indigo Kid “Great tunes, I love the fluid feel. I like the freshness of the overall vibe ") and Dave Cliff. Besides Indigo Kid, Messore plays in Trust Trio alongside Aidan Thorne [bass] and Mark O Connor [drums]. Lacuna Quintet features another mentor of Messore's, the trumpeter Steve Waterman. He has also played with the likes of Geoff Simkins, Kevin Figes, Nia Lynn, Lee Goodall, Dave Cliff, and Trish Clowes among others.


IAIN BALLAMY needs no introduction; Known internationally as the 'Fantastic Englishman', Ballamy is a titan of the British saxophone. He made his name in the big band Loose Tubes in the 1980s before going on to make some high level recordings of his own through the 1990s. As well as heading the highly regarded ambient Norwegian jazz electronica group Food, he is also a post-bop player of immediate expression and fluency and has performed with Hermeto Pascoal, the late Gil Evans, George Coleman, Dewey Redman, Mike Gibbs among others.

TIM HARRIES has had a successful, versatile career. He was a member of Bill Bruford's Earthworks from 1989 to 1993 and Steeleye Span from 1989 to 2001 and has since worked as a session musician for artists as diverse as Brian Eno and Katie Melua, as well as film Composers David Holmes and Stephen Warbeck, and writer Alan Moore, on the audio CD version of Moore's 2001 comic book novel "Angel Passage".

GETHIN JONES is a young welsh drummer who studied at the welsh College of Music and Drama in Cardiff and then Trinity, and has worked with Cameron Pierre, Geoff Eales, Steve Waterman, Geoff Simkins, and Esmond Selwyn among others.