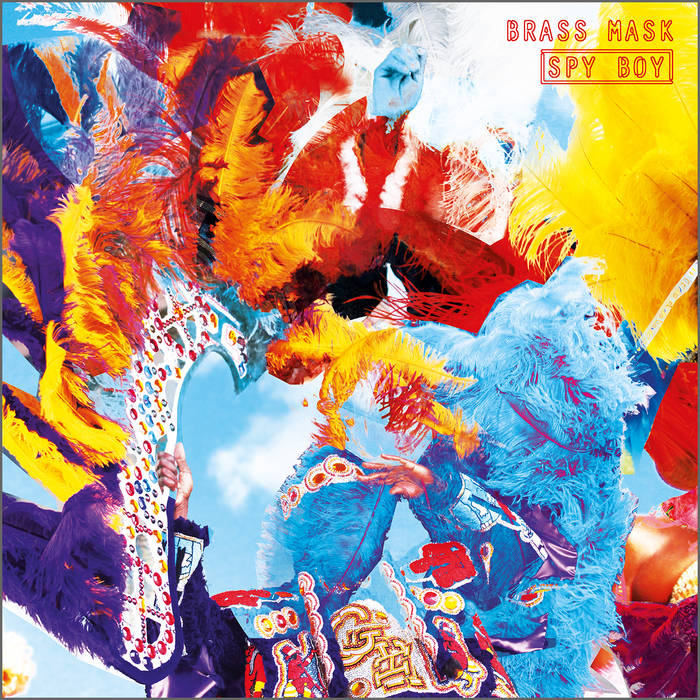 Formed in London in early 2012 by reedsman Tom Challenger, Brassmask is an octet with a difference, boasting a line-up of percussion and seven horns, ranging from high-flying clarinet way down to bottom-heavy tuba.

It’s a formation that effortlessly plugs into the joyful sound of free-wheeling group improvisation, heavily influenced by the legendary Mardi Gras Indians – the flamboyant African American street bands of the New Orleans Carnival.

Challenger explains: “I took the energy and some of the melodic constructs of their music and applied it to some of the tunes I’d started writing for the ensemble.”

That intention comes to brilliant fruition on the ensemble’s debut album, Spy Boy.

Horns rise up in mass unison, driven along by John Blease’s diamond-sharp drum grooves and the snuffling basslines of Theon Cross’s tuba, parting at key moments to let the spontaneous ideas of individual voices shine through.

Just listen to the great weary lope and finger-popping dance hop of ‘Indian Red’ – simultaneously mournful yet jubilant – and you’re instantly transported to a Louisiana street party in full swing.

But there are other key influences at work on the album, too.

On ‘I Thank You Jesus’ – with its growling, low-down blues moan – Challenger pays tribute to the old-time church spirituals of the Deep South; while on ‘Don’t Stand Up’ driving, complex percussion rhythms nod respectfully to Challenger’s experiences playing Sabar music with Gambian and Senagalese musicians.

And in the expansive, painterly charts of pieces like ‘Onnellinen’ and ‘Shallow Water’, it’s easy to detect the subtle touch of a giant of contemporary jazz, as Challenger explains:

“A big influence on me and my writing for this recording was Henry Threadgill's Just The Facts and Pass The Bucket. Its combination of form-based improv, harmonic counterpoint and intense ensemble playing has been a big marker for me with Spy Boy.”

Yet, Spy Boy presents a lot more than just the sum of its influences. Bringing together eight of the brightest young players on the current London scene, it bursts with eclectic, 21st century energy.

Hear how, on ‘Onnellinen’, Blease’s drums pop and click, riding on the perky, intertwined horn charts to suggest a subliminal reggae rhythm; or how the off-kilter funk of ‘Francis P’ plays with time, woozily slowing and speeding like a taxi caught in rush hour traffic.

Spy Boy is a party, for sure. And it’s one that’s happening right now.


Tom Challenger is a core member of ‘Loop Collective’. As well as leading Brassmask, he co-leads Wedding Music, Ma and Dice Factory, a quartet who released their debut album in 2012. He is a member of Outhouse and Outhouse Ruhabi, and has worked with Red Snapper, Michael Garrick, Django Bates and many others.

Dan Nicholls is a keyboardist, reeds player, composer and producer, also working with video and animation. His work is inspired by prevalent issues such as exploring environment, experience and identity, as well as the use of various forms of media for political and social influence.

Rory Simmons has worked with leading names in British and European jazz including Gerard Presencer, John Etheridge, FIRE Collective, Byron Wallen, and others. He has worked with Alex Bonney on a repertoire of contemporary trumpet duets, and with a trio, Monocled Man, featuring Chris Montague and Jon Scott.

Alex Bonney leads the Alex Bonney Trio and co-leads Splice, Leverton Fox, BABs and an improvising duo with bassist Dave Kane. He is a sideman with several projects including World Sanguine Report, Golden Age of Steam and Examples of Twelves, and has collaborated with Paul Dunmall, Mark Sanders and others.