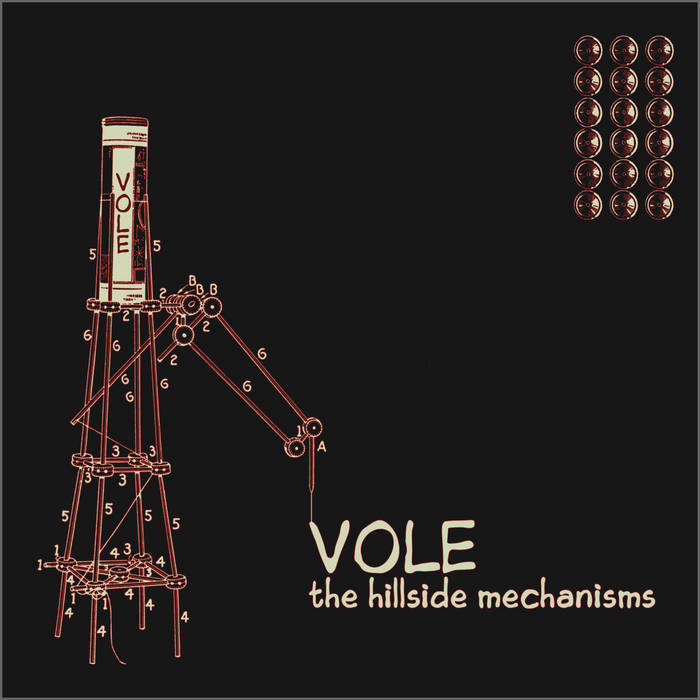 Christopher Moklebust The Hillside Mechanisms is an abstract jazz album that contains both moments of improve as well as some premeditated composition. It all jives well with a peculiar precision to it all.

The debut album by Vole is a lesson in fertile contradictions. Created by three of European Improv’s bright- est young practitioners, it’s a focussed and detailed study into how to combine the freedom and spontanei- ty of improvisation with the structure and forms of rock and composition.

Of course, there is plenty of skilled improvisation. ‘Tim’s Frosties’ contains gouts of jagged, howling group extemporisation, with blustery trumpet, taut guitar shredding and tumbling percussion that wouldn’t sound out of place coming from one of Anthony Braxton’s more mobile recent units. Other pieces, like ‘Voice Unvoiced’ and ‘Improctober’ are more meditative – almost ambient – like environmental audio postcards from a mist-clad mossy hillside or a steamy jungle valley.

But, it’s on tracks like ‘No Knees’ and ‘Slow Burn’ that Vole most forcefully mark their territory. Angular, Prog- punk chops and jerky non-rock riffs give way to loose and unhurried interludes of group improvisation. These, in turn are punctured by explosive bursts of energy and throbbing investigations of extended tex- tural posture. And all the time, the killer riffs are straining to break through, like barely restrained, froth- mouthed dogs snarling at the end of a leash.

Ultimately, it’s all about the tension between abandon and control. You could call it an attempt to reconcile Dionysian and Apollonian artistic urges. Or you could just call it great music. Either way, you’d be right.

The trio known as Vole developed out of a series of informal jam sessions held at the London home of Javier Carmona – as Roland Ramanan explains: “Many musicians have passed through the laboratory of Javier’s pervious residence in Hillside Road. Roberto and myself were part of this stream and quickly found that working and playing together was highly fruitful.”
From the outset, Carmona, Ramanan and Sassi were dedicated to a collaborative process that playfully disre- gards conventional genre boundaries. “Like others in the UK scene,” says Ramanan, “Vole are taking a good look at what composition has to offer musicians from a rock and improvising background, and coming to our own conclusions. None of the tracks on The Hillside Mechanisms owes its final form to just one member of the group, and this tolerant but spirited interplay of ideas helps to keep the music evolving.”
Since recording the album, the Vole line-up itself has undergone further evolution. The live band is now a quartet, including critically acclaimed British pianist Alexander Hawkins, and with Tom Greenhalgh replac- ing Carmona on drums.

Trumpeter ROLAND RAMANAN has been a continual presence on the London improvised music scene since playing with legendary drummer John Stevens in 1989. Constantly exploring the boundaries between composition and improvisation as well as the sound possibilities of the trumpet, he has worked with Peter Brotzmann, Evan Parker and others.

During the 90s and 00s, Italian guitarist, ROBERTO SASSI, explored the borders between hardcore-punk, jazz improvisation and electronica with bands like Cardosanto. In 2007, he moved to London and joined the London Improvisers Orchestra. As well as Vole, he also plays in the south London post-rock unit, Snorkel.

Spanish percussionist, Javier Carmona, grew up playing drums with experimental rock bands and free-jazz groups in Madrid. In 2005, he moved to London and gained a reputation as a rising star of European Improv, playing with luminaries such as John Tchicai, John Russell
and others. He now lives in Barcelona.