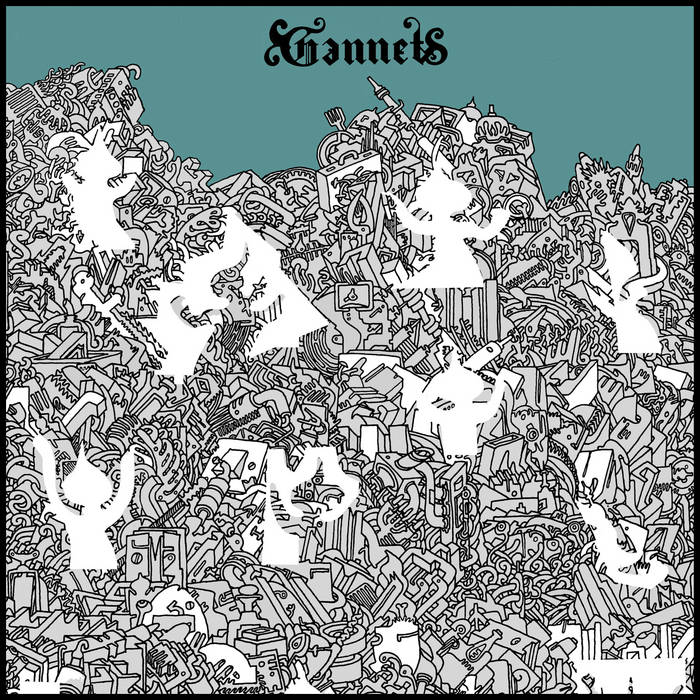 GANNETS emerged onto the UK’s underground music scene at around the same time that keyboardist, guitarist and amateur ornithologist Fyfe Dangerfield also formed his pop band Guillemots and subsequently signed to Polydor (Universal Music). Guillemots went on to be shortlisted for the Mercury Music Prize but Gannets found their way into a more unusual side of London’s glitterati, namely Hugh Metcalfe’s legendary Klinker Club – home to alternative cabaret, DIY cinema and free jazz. Guillemots shared Gannets' clarinet and sax section Chris Cundy and Alex Ward for the first few years, and although the two bands served entirely different functions for Dangerfield, a mutual coexistence of pop and experimental music became an important aspect to both projects in varying degrees.

Cundy had met Dangerfield whilst working on a piano-bar job at a Cheltenham nightclub, and the pair soon recognised a shared passion for unconventional performance which manifested itself in a variety of guises, including their duo The Executive Caveman which served as an experimental hip hop outfit for a number of thankless open mic nights. After a short stint in LA trailing West Hollywood’s little known improvised music scene, the pair returned to the UK for a Jazz Services funded tour of an expanded outfit called Transmissions of Not, featuring bassist Aristazabal Hawkes who would later join Guillemots. Just prior to the formation of Gannets, Steve Noble had invited Cundy, Dangerfield and Hawkes to perform at the London Musicians' Collective annual free festival held at Conway Hall, in what was to become the last performance by Transmissions of Not, although the name of the band lives on as the title for Gannets debut album.

Dominic Lash joined Gannets after the band's first few shows at the Klinker Club, replacing double bassist John Edwards. By this time they had established themselves within a deeply rooted free improvisation tradition, injecting the music with a playful sense of melody and a strong rhythmic setting that can evoke elements of pop, cartoon music and swing. Over recent years, Gannets have become fond of playing some of London’s more unusual venues such as Bloomsbury Bowling Lanes, The Montague Arms or the floating poetry/music club Boat-Ting. Alex Ward sums up the often contradictory nature of their music: “Gannets posit an alternative jazz history in which 30’s swing developed straight into a combined form of the free jazz and fusion movements, without any of the intervening decades”.

CHRIS CUNDY is a bass clarinettist and saxophonist living in south west England and in London. During his formative years he shared a house with self-made musician and painter Billy Childish, and as a teenager started out as a street busker. It was in this initial DIY environ that he first developed a fascination for improvised music. In recent years he has featured as a guest curator for Cheltenham Jazz Festival, which involved him co-hosting events alongside comedian and music fan Stewart Lee. Cundy performs in many different improvisation groups but most predominantly with Gannets. He has worked closely with musician/composer Fyfe Dangerfield in a variety of projects from pop band Guillemots to theatre music for Voices Theatre and Southwark Playhouse. Cundy also performs with 'doom-soul' band Cold Specks and his TV appearances include Top of the Pops, Later with Jools Holland, Hollyoaks, Newsnight Review and Jonathon Ross. Collaborations with electronics outfit Longstone led him to work on a live soundtrack for Osbert Parker's BAFTA nominated animation 'Film Noir' commissioned by Future Shorts Cinema in 2009. Over the past few years he has also worked with Nofit State Circus, creating music for their award winning shows in Europe and Canada.

FYFE DANGERFIELD is best known as the founding member and principal songwriter of BRIT and Mercury Music Prize nominated band Guillemots, whose champions include Sir Paul McCartney. He has also released one solo album, 2010's gold-selling 'Fly Yellow Moon', and also plays with tea-dance-gone-wrong improvisers Gannets and roll-n-roll merchants The Courtesy Group. In 2007, his debut orchestral piece 'In Wait' was premiered by the City of Birmingham Symphony Orchestra; he has also written a number of choral works for Birmingham's Ex Cathedra choir and three solo pieces for cellist Natalie Clein, the latest of which was premiered at Bath International Music Festival in 2011. Back in 2002, Dangerfield was also commissioned to write 'A Stray Dog for Congratulations' - for three children's choirs, four percussionists, two pianists and keyboard - for The Lichfield Festival. The performers included the Backbeat percussion ensemble, as well as the Sydney Children's choir.
In 2011 Fyfe wrote his first theatre soundtrack for a production of the fairytale 'Howl's Moving Castle'. He is also active on the UK improvised music scene, having played piano, keyboards and various objects over the years in duos & groups with the likes of Steve Beresford, Adam Bohman and John Edwards as well as his Gannets cohorts. Plans are afoot for him to record a solo piano release in 2012, and a new group featuring instrumental compositions is also beginning to call from the pipeline.

While reading English at St John's College, Oxford, DOMINIC LASH met and performed with pianist
and keyboard player Pat Thomas, which set him on the path of being an improvising musician. In the decade since he has become very active in the fields of improvised and experimental music, performing with musicians such as Tony Conrad, Rhodri Davies, Joe Morris, Evan Parker, and Michael Pisaro in the UK, Europe and USA. Lash has improvised with every member of Derek Bailey's Limescale apart from Bailey himself. He is also a member of a great many semi-regular groups besides Gannets, prominent among which are a trio with John Butcher and John Russell; a duo with Patrick Farmer; the Convergence Quartet; Alex Ward's Predicate, and various collaborations with
the Swiss duo Diatribes. For nearly ten years he was an active member of Oxford Improvisers, an organisation he helped to establish. In 2010 he founded the Set Ensemble, an experimental music group with a particular focus on the work of the Wandelweiser composers collective. Recordings of his work are available on the Another Timbre, Babel, b-boim, Bead, Cathnor, Clean Feed, Compost and Height, Creative Sources, Emanem, Foghorn, FMR, Leo, Psi and Winds Measure labels.

From playing with Nigerian master drummer Elkan Ogunde, Rip Rig and Panic, Brion Gysin and the Bow Gamelan Ensemble, STEVE NOBLE went on to work with the pianist Alex Maguire and with guitarist Derek Bailey (including Company Weeks 1987, '89 and '90) and was featured (along with Alex Ward) in the Channel Four TV series based on Baileys book 'Improvisation: its nature and practice in music'. He has toured and performed throughout Europe, Africa and America. He currently leads the groups N.E.W, Decoy, 4tet (Yarde/Robinson/Edwards), Harry Love All Stars and a trio with Lol Coxhil and John Edwards. He also occupies the drum chair in the following groups: Duck Baker 4, SFQ, Badland, Gannets, Aethenor (with Stephen O'Malley), Orphy Robinson's Spontaneous Cosmic Raw Xtra, Freebase and Tim Hill's Tongues of Fire. He has been MD for the Spanish dance company Mal Pelo since 1998. Noble also runs the record company Ping Pong Productions. Recently, Noble has performed with Peter Brotzmann, Joe McPhee, Matthew Shipp, Jason Spaceman, John Butcher, Paul Dunmall, Pule Phetto, Agusti Fernandez, Ikue Mori, Ken Vandermark and Lean Left (The Ex Guitars).

ALEX WARD was born in 1974, and has been active in free improvisation since being given his first gig by Derek Bailey in 1987. He has gone on to work with a wide range of musicians as a clarinettist (sometimes also on alto sax), and increasingly since 2000 as a guitarist. In addition to his continued involvement in a number of regular and semi-regular improvising combinations, he has played in bands led by Simon H. Fell, Eugene Chadbourne, Duck Baker and Luke Barlow (with whom he runs the label Copepod). He also co-led the rock band Camp Blackfoot with Benjamin Hervé, and in 2005 released a solo album of songs entitled "Hapless Days", which led to the formation of Alex Ward & The Dead Ends to perform these songs and more. (His subsequent solo album "Cremated Thoughts" is a set of improvisations on clarinet.) Current projects include Predicate (a quartet featuring Tim Hill, Dominic Lash and Mark Sanders, playing compositions by Ward - debut album to be released in 2012), and Dead Days Beyond Help, a collaboration with drummer Jem Doulton in which Ward plays guitar, sings and co-writes the material.