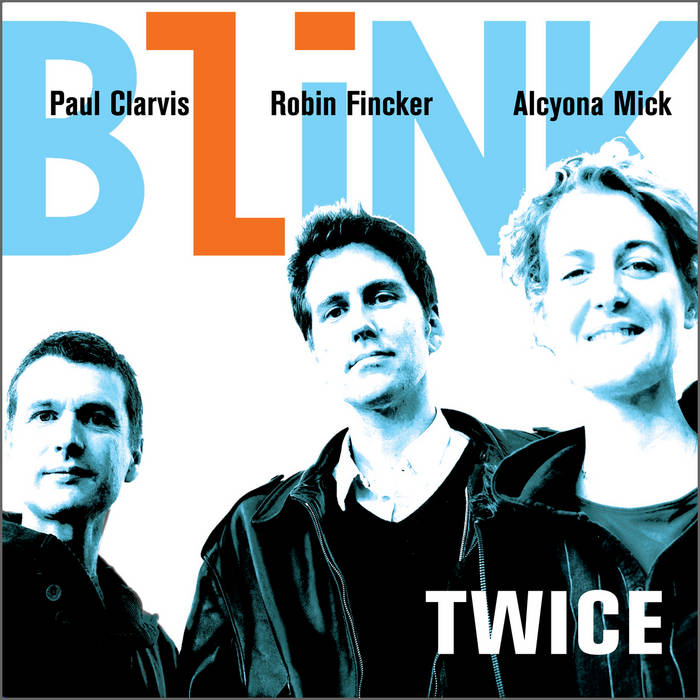 It’s an impossible task to categorize the sax-piano-drums trio Blink in terms of style or genre. Made up of the young pianist Alcyona Mick, reeds player Robin Fincker (Outhouse) and the renowned percussionist/drummer Paul Clarvis, theirs is a music that thrives on its fluidity. That’s not only in terms of musical inspirations but also performance interaction and collaboration. This is apparent on the two-disc set Twice, the first CD, a studio recording and the second, on which they hook up with the phenomenal Parisian experimental cellist Vincent Courtois in a performance recorded at the Vortex in East London on the occasion of the LOOP festival in February 2010. Blink has been featured on BBC 3 with both live and album recordings, a Jerwood Jazz Generation band at the Cheltenham Jazz Festival and was nominated for the Promoters’ Choice award in 2007, as well as touring both nationally and internationally.

Formed in 2006, Blink are the embodiment of the creative, collective ethos of North London’s widely acclaimed LOOP Collective of which Mick and Fincker are both founder members. Paul Clarvis on the other hand is the senior member of the group, an acclaimed, versatile percussionist who has built his reputation in the creative fields of rock, film and classical music as well as various sides of jazz. First impressions then that takes into account the LOOP pair and Clarvis’ differing tastes, backgrounds and generational impulses makes it appear an unlikely merger. But the band uses this to their advantage. With Mick and Fincker’s original compositions (and an interpretation of Steve Lacy’s ‘Image’) as improv vehicles, Blink is a listening game, in which the aim is to spark off one another, making the kind of unexpected connections that are the lifeblood of spontaneous improvisation. The compelling way all three members de-root from more traditional jazz roles, pushing and pulling, teasing each other to leave their comfort zones is a jazz improv exercise that has a rich tradition. This was heard on the critically acclaimed eponymous debut recorded at Abbey Road studios and released on the LOOP Label in 2008. Blink continues the experiment on their new recording Twice.

Through their keen interest in collaboration work on CD-2 Blink playing with Vincent Courtois. (Blink has also performed next to French saxophonists Guillaume Orti and Stephane Payen, poet Paul Hyland, and Solid Strings quartet) Courtois on CD-2 adds a new dimension to Blink as his character, founded on minimal, gracefully subtle nuances, emerges in the story, a fresh textural weave and sonic palette springs from the themes written by both Fincker and Mick.


Having started playing piano at the age of 3, ALCYONA MICK went on to study jazz at the Birmingham Conservatoire and Royal Academy, then surfacing in 2005 as a founder member of the LOOP Collective along with the Babel recording Outhouse saxophonist Robin Fincker. The guardian recently described her as having ‘world class ingenuity’. Alcyona has released an award winning debut album ‘Around the sun’ (Audio-b jazz label), and now works internationally with artists such as world music star Natacha Atlas. She recently graduated from the prestigious National Film and Television school with a Master’s degree in composing music for film, and has written and produced a wide variety of music for fiction, documentary and animation screened at film festivals allover the world. She has also received many commissions to write and perform live to silent film, including new scores for Len Lye’s ‘Tusalava’ and Murnau’s historic masterpiece ‘Sunrise’.

31 year old French saxophonist and clarinettist ROBIN FINCKER lived in London for over 10 years and now divides his time between the British and the French music scenes. He studied at the Guildhall School of Music (London) and the Conservatoire Superieur de Musique de Paris (CNSMDParis). A hyperactive project instigator and an in-demand sideman, Robin is a founding-member of the Loop Collective in London, considered today as a major force on the British Jazz scene. Since 2005 he co-leads Babel recording artists Outhouse, which became one of the leading groups of the young London-based contemporary Jazz scene. He was also noticed through his other projects such as Blink and Splice, a quartet of “post free-jazz” improvisers investigating the possibilities of the laptop and real time processing in composition and improvisation. He has been described as an “excellent tenorist…a sax world somewhere between Wayne Shorter and Evan Parker” by John Fordham in The Guardian and as “a musician deploying an impressive palette of talents.” by Thierry Quenum in Jazz Magazine in France. Keen on the idea of “bands” in music he is also a member of Farm Job, Vincent Courtois’ trio: The Mediums, Hans Koller large ensemble, Surnatural Orchestra, Fringe Magnetic, Mikkel Ploug/Simon Jermyn 4tet amongst others. He has also shared the stage or recorded with the likes of Evan Parker, Bill Frisell, Hilmar Jensson, Jeanne Added, Jeff Williams, Paul Rogers, Brian Irvine, Mike Gibbs, Eve Risser among others. In the past years Robin has been performing extensively on the European contemporary Jazz scene and in many festivals including London Jazz Festival, Jazzdor Festival (Fr), Banlieues Bleues (Fr), Koktebel Jazz Festival (Ukraine), Cheltenham Jazz Festival (UK), Bray Jazz Festival (Irl) and his music was recorded several times for radio programs on BBC, Radio France & WDR. In parallel to his activities as an instrumentalist and a composer, in 2009 he was selected to take part in the Jerwood/PRSF Take 5 initiative, a career development scheme for young composers of outstanding potential. He has also been a guest teacher at the Guildhall School of Music, Birmingham Conservatoire and the Conservatoire National of Strasbourg.

PAUL CLARVIS is equal parts jazz musician and virtuoso classical percussionist. Best known in the classical world for his controversial Proms performance in 1995 of contemporary composer Harrison Birtwhistle’s Panic alongside saxophonist Jon Harle he was also the late Leonard Bernstein’s preferred percussionist when in London. But his versatility extends to an accomplished jazz musician, among those he’s played and recorded with include anyone from Andy Sheppard through to John Zorn. Paul brings his unique style of musicianship to many genres as one of the most requested session musicians, his playing can be heard on hundreds of films including Star Wars, all the Harry Potter films, all the Narnia films, all the Twilight films, the Dark Knight, the Constant Gardner, The Bourne Ultimatum, Burn After Reading, Shakespeare in Love, Fantastic Mr Fox, Billy Elliot, James Bond, Robin Hood, G.I.Jane, Notting Hill, Tron, The Mummy, The Golden Compass, Bee Movie, Troy, State of Play, The Road, The Last King of Scotland, Spygame, Elizabeth: The Golden Age, The Escapist, Captain America, Shrek, Hugo, Cabret, Kung Fu Panda, Lord of the Rings. He has appeared on records by Elton John, Mick Jagger, Underworld, Elvis Costello, Harrison Birtwhistle, Richard Thompson, Michel Legrand, John Adams , Bryan Ferry, Sam Rivers, Annie Lennox, Night Wish, John Williams, Moondog and his own band Orquestra Mahatma. He regularly plays with Mose Allison, Blink, Alan Barnes & Viktoria Mullova.