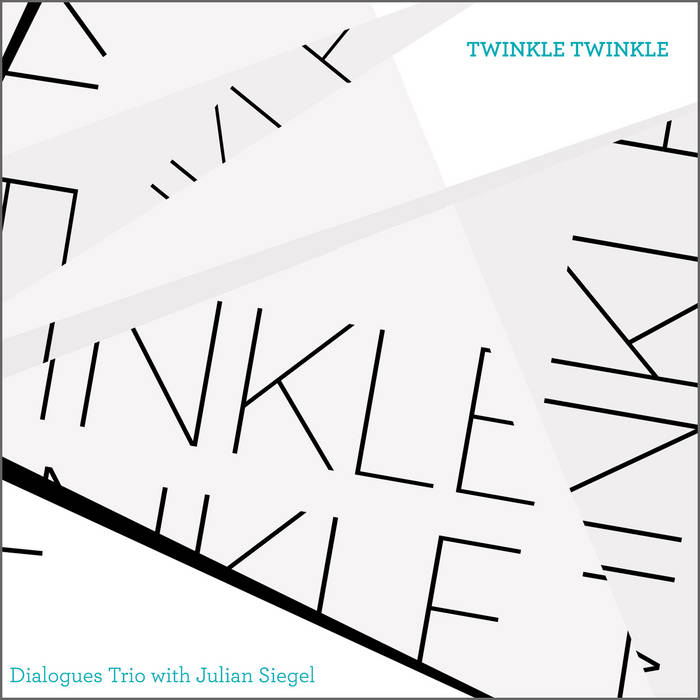 The raw material for the debut of the young London- based pianist-composer Bruno Heinen’s Dialogues trio comes from a tune that has been playing in most of our heads since childhood. Twinkle Twinkle has ten variations on the titular nursery rhyme in various wittily disguised forms that appear as small motifs and musical fragments played by each of the members of his piano trio. But the Twinkle melody is merely the trio’s point of departure. Heinen is contemporary in every sense of the word and mines the depth of his diverse influences throughout the recording. The pianist formed Dialogues trio in 2005 while studying for his jazz masters (Heinen is a student of John Taylor) with his peers at Guildhall School of Music and Drama, the double bassist Andrea Di Biase and the current go-to young Mancunian drummer Jon Scott, from MOBO award winners Kairos 4tet.

Heninen has written the compositions with Di Biase and the opener ‘Waltz for Rossie’ has something of the haunting magic of a great Bill Evans theme coupled with the soothing resonance of a folky Middle Eastern type melody. But there’s another side: ‘Spin Wins’ is more angular with bass and drums pulsating with simmering swing, as the renowned UK reeds player Julian Siegel (who guests throughout the album) illustrates why he’s a top drawer improviser, his playing inflected here with Eric Dolphy-like fervour on bass clarinet. Heinen’s early classical training at the prestigious Royal College of Music is also evident throughout. A chamber-like counterpoint infects the writing for trio and also brings to mind some of Lenny Tristano’s most haunting chamber jazz works combining composition, improv and swing while Heinen’s fluid, ideas-led improvisations can also draw from minimalism through to more abstract contemporary classical music.

These musical fascinations are demonstrated by Heinen’s various projects and contribution to various bands. They range from a project focusing on a piece by contemporary classical icon Karlheinz Stockhausen (see biog below) through to a long time duo playing traditional Palestinian, Egyptian and Persian music with passionate Palestinian singer Reem Kelani ("Kelani's voice is a technical marvel, capable of transforming deeply felt emotion into a range of pulverising hollers and keening wails." The Guardian, James Griffiths) alongside musicians such as Byron Wallen, all the way through to being a member of scat singer Emily Saunders’ band, a critics top tip for 2012. All the way through the recording, Heinen organically navigates these intriguing musical outposts while maintain a cohesive narrative.

In 2005, Bruno Heinen and bassist Andrea Di Biase formed Dialogues Trio with drummer Jon Scott. They have gone on to tour Italy and play major venues in London, and have been filmed for the Performance Channel on TV and played on Radio 3’s Late Junction. In recent years they have toured in Italy as well as playing in clubs in and around London. Heinen studied classical piano at the Royal College of Music with the then head of keyboard Andrew Ball going on to win prizes from the Musicians Benevolent Fund and the Countess of Munster Trust before taking his Jazz masters at the Guildhall School of Music and Drama where he studied under John Taylor. as a Junior Fellow where he completed a Masters of Musical Performance as well as now teaching Jazz harmony to the classical piano students. In 2009, Heinen was nominated for the prestigious Paul Hamlyn Composers Award as well as the British Composers Award. He has performed and collaborated with high-level UK jazz musicians such as Julian Siegel, Martin Speake, Byron Wallen and Stan Sulzmann. As a composer, Bruno has written for groups ranging from sextet to two pianos and percussion, and from big band to classical string trio. In 2008 Bruno arranged Karlheinz Stockhausen’s ‘Tierkreis’ for Jazz sextet. The piece was originally written for twelve music boxes, one for each sign of the zodiac. Four of the original music boxes have been in Bruno’s family since he was born which started his fascination with the piece. Incorporating the boxes in the performance, Bruno premiered the arrangement at the Vortex Jazz Club. In 2010 Bruno re-arranged the piece for cello, double bass and piano for a performance with cellist Ulrich Heinen at the CBSO centre in Birmingham as part of the CBSO chamber music series. It will be recorded in a line-up including Shabaka Hutchings and Tom Challenger in 2012.

Bruno also has a longstanding duo with world renowned Palestinian Singer Reem Kelani,. In recent years they have toured in Syria, Spain, Turkey, Dubai and Scotland, as well as performing live on radio broadcasts.

"Twinkle Twinkle is an absorbing set of variations and improvisations.
Bruno's trio explore the music with skill and invention and Julian Siegel's ingenious performance is superb.
An excellent achievement."
-JOHN TAYLOR-