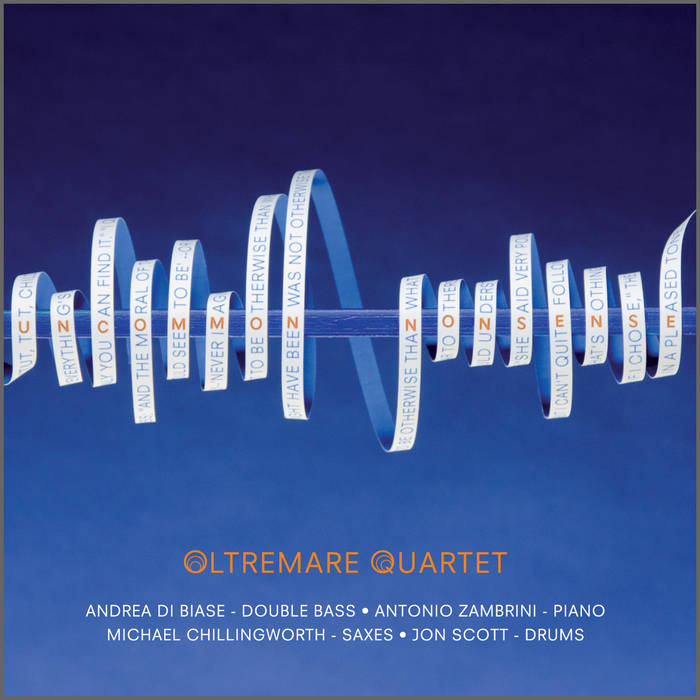 Currently the double bassist of choice for Kenny Wheeler in his new trio, the young Milan-born, London-based composer-bassist Andrea Di Biase makes his debut as leader on the influential indie jazz Babel Label. The band are Oltremare Quartet, and it’s the name, translated from the Italian as ‘Overseas’, that says something about where the band are coming from: “We play on the differences of our two musical worlds divided by the sea,” says Di Biase. “One is rooted in the melodic and poetic approach of Italian masters like Nino Rota, who amongst other things wrote for Federico Fellini and Francis Ford Coppola; the other in the harmonic and rhythmic language of icons of the British jazz tradition such as Kenny Wheeler and John Taylor.”
The rich sources of Di Biase’s influences are heard on Uncommon Nonsense. A musician who studied at the Milan Conservatory, Di Biase arrived in London for his post-graduate Guildhall studies, where he was mentored among others by pianist John Taylor. But the description above is also a reflection of a band that’s split right down the middle in terms of nationality, the quartet of musicians coming from both Italian and British backgrounds. With Antonio Zambrini, a critically acclaimed pianist and composer from Milan (the internationally renowned young Italian pianist Stefano Bollani opened his ECM piano solo album with Zambrini’s composition “Antonia”) there’s a Mediterranean playfulness and sensuous romanticism throughout some heartfelt solos on the recording. But the band’s two young British members aren’t there just to make up the numbers: the harmonically adventurous Lee Konitz/Wayne Shorter-influenced young alto and soprano saxophonist Michael Chillingworth (an ex-member of the late Richard Turner’s Roundtrip) is someone who we’ll be hearing a lot more about in the future while drummer Jon Scott is someone already making waves on the UK jazz scene as a member of the MOBO award winning Kairos 4tet and as the go-to drummer of the moment. But in spite of the personnel’s very different backgrounds, Oltremare Quartet is a band in which cultural and musical identities are successfully absorbed and merged. The band is a great example of how a contemporary jazz group is able to naturally absorb both the traditions of American post-bop and lyrical South European classical and folk-influenced jazz.

Oltremere quartet has performed on both sides of the water too in the last couple of years, having major festivals under their belts in Italy such as the Milan Film Festival and BorgoJazz in Genova as well as several creatively vibrant underground clubs in London such as the Oxford in Kentish Town, Charlie Wright’s and Posk.

Double bass player and composer ANDREA DI BIASE studied Classical double bass at Conservatory of Milan before enrolling on the Post-Graduate Jazz Course at Guildhall School of Music in London, where he achieved a distinction. He had the opportunity to study with many world-class musicians during his studies such as Scott Colley, Drew Gress, John Taylor and Rufus Reid. In the UK he has played concerts with outstanding musicians like Stan Sulzmann, Norma Winstone, Pete Saberton and Asaf Sirkis and with pianist Liam Noble he plays in the new trio of the legendary trumpet player and composer Kenny Wheeler. He has played in major festivals such the London Jazz Festival, The Hague Jazz Festival and was invited at the 2011 Meeting of IASJ (International Association of Schools of Jazz) in Sao Paolo, Brazil where he had the opportunity to play with jazz giant Dave Liebman. Other significant recent recordings include the Dialogues Trio, led by pianist Bruno Heinen, and their new album Twinkle Twinkle also released on the Babel label, featuring Julian Siegel on sax. Andrea has given workshops at the Conservatory of Milan as well as the Guildhall School of Music in London and has recorded live for BBC Radio 3.

ANTONIO ZAMBRINI hails from the deep Italian tradition of the mainstream piano trio, much of which has been documented on the renowned Italian-based Splasc(h) record label. His compositions are often appreciated by outstanding musicians and critics: the world-renowned pianist Stefano Bollani opened his piano solo ECM album with Zambrini’s composition “Antonia” while the British pianist John Law dedicated to Zambrini the album called “the Moment”, He has been signed with the label Splash Records from 1998 until 2001, releasing two albums “Antonia e altre canzoni” and “Forme Semplici”. He is currently signed with the label Abeat Records, which released his recent works “Quartetto” (2001), “Due Colori” (2003), “Musica” (2005) and “Ron Horton Quartet featuring Antonio Zambrini, It’ s a gadget world” (2009) with Ben Allison on bass and Tony Moreno on drums.
He also recently recorded with Lee Konitz three albums “Lee Konitz meets Antonio Zambrini Vol 1, 2, 3” for the label Philology (2008).
In 2009 he performed a piano solo concert for the Italian national Radio Rai 3 in the palace of the President of the Republic (Scuderie del Quirinale) in Rome.
He performed in several major fastivals and venues around Europe and US with outstandiing musicians such as Lee Konitz, Enrico Rava, William Parker, Hamid Drake, Mark Murphy, Tiziana Ghiglioni, Ron Horton, Claudio Fasoli, Ben Allison, Gabriele Mirabassi, Garrison Fewell, Emanuele Cisi, Javier Girotto.
The culmination of several concerts Ron Horton played in Italy in 2005 and 2006 with Italian composer/pianist Antonio Zambrini, It's a Gadget World was recorded in New York in late 2006 and features the pianist, bassist/composer Ben Allison and drummer Tony Moreno.

Manchester-born drummer JON SCOTT has been based in London since 2005. He quickly established a reputation as a creative and flexible player on the UK jazz scene, while building up his international connections, playing extensively throughout Europe. He has performed with artists including Will Vinson, Julian Siegel, Julian Joseph, Byron Wallen, Nikki Iles, Mike Walker and holds the drum chair in a large number of original groups, including 2011 MOBO “Best Jazz” award winners Kairos 4Tet, Hannes Riepler’s band, Dice Factory, Rory Simmons’ new Monocled Man trio, Candid Records artist Mishka Adams’ band and Anglo-German collaboration Paragon (nominated for the 2012 Neuer Deutsche Jazzpreis). As well as the usual London venues, Jon tours the rest of the UK and Europe regularly. Festival appearances include the London, Copenhagen, Manchester jazz festivals, ELBJazz (Hamburg). Jon graduated with distinction from the Guildhall School of Music masters programme and has studied for several years with renowned Manchester-based teacher Dave Hassell.

A UK-based alto and soprano saxophonist, MICHAEL CHILLINGWORTH studied at the Guildhall school of music between 2003 and 2007 and was a member of the late trumpeter Richard Turner’s Roundtrip produced by the renowned saxophonist Julian Siegel, Calum Gourlay Quintet and James Maddren’s group and has been also featured soloist on the legendary pianist John Taylor’s CamJazz big band release ‘Pure and Simple’. He has performed at numerous jazz venues throughout London and the UK such as the 606 club, the Vortex and the Con Cellar Bar with own quartet and other ensembles.