WHAT DO YOU SEE WHEN YOU CLOSE YOUR EYES? 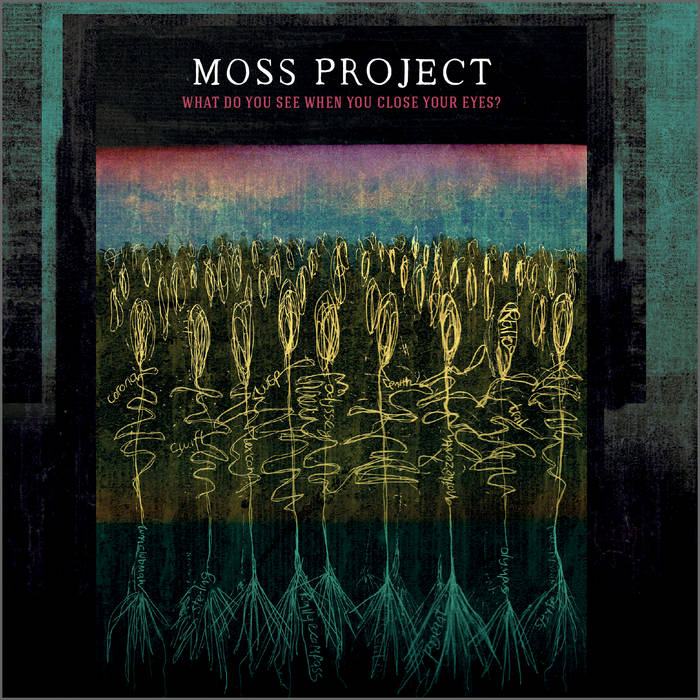 Kenneth Pyron Though written by one person, Moss Freed, I get the feeling that either he's extraordinarily generous in his writing for other musicians, and/or he's rather gifted and utilizes the outstanding talent in front of him to their best abilities. Either way, an outstanding album, and along with his first album, Visions, a wonderful snapshot into the mind of a true composer and talent. Favorite track: WHAT DO YOU SEE WHEN YOU CLOSE YOUR EYES?.

What Do You See When You Close Your Eyes? is an album of collisions and reconciliations.

The CD and accompanying book represent a collision of sound and story, a marriage of music and literature. What started out as an album of original compositions has been expanded to a deluxe art object, with the addition of six new pieces of fiction, each one written as a response to a particular track on What Do You See When You Close Your Eyes?
In the up-beat groove of ‘The Bubble,’ tricky prog time signatures and stop-start riffs meet soulful funk and openhearted jazz soloing to make music for body and mind. In the down-tempo sigh of ‘Anniversary’, mel- ancholy fiddle and clarinet sit against twanging Bill Frisell-like guitar to paint a rain-soaked audio landscape. And on the title track, a jumping Afro-beat shimmy smashes into moody post-rock vibes to create a truly cosmopolitan 21st century hybrid.

In the same way, throughout the album, the contrasting lead voices of Moss Freed’s precise and determined electric guitar and Alice Zawadzki’s soaring violin and ecstatic wordless vocals combine to offer a captivating snapshot of the human heart that stops you in your tracks.
 
“Moody, cinematic compositions that blur the line between folk, rock and jazz with imagination and flair.” Time Out London

Led by guitarist Moss Freed, Moss Project, brings together key figures from the cutting edge of the 21st century UK jazz scene. What Do You See When You Close Your Eyes? is Moss Project’s second album, produced in conjunction with a book of short stories, written by some of Britain’s freshest literary talents. Naomi Alderman, Joe Dunthorpe, Colum McCann, James Miller, Lawrence Norfolk andHanan al-Shaykh have each contributed new work to this unique project, directly inspired by the music on this gripping album.

The music and words are brought together in a beautifully-illustrated hardback book with CD insert.

Mancunian guitarist MOSS FREED is founder and leader of Moss Project, which released its debut album, Vi- sion, in 2009. The album was greeted by prog-jazz drum legend Bill Bruford as “a real achievement.” Moss has also founded jazz-rock band Let Spin and established the Coventry Calling music festival in Connecticut.

Bassist RUTH GOLLER is best known for playing bass guitar in the groundbreaking band Acoustic Ladyland, although the Italian-born Londoner has also performed in a wide range of situations including work with the acclaimed Serbian jazz piano star Bojan Z. Goller also leads her own band, Big Cat.

Vocalist and violinist ALICE ZAWADSKI has worked with jazz vocalist Norma Winstone of Azimuth, and singer Jacqui Dankworth. Zawadzki makes her solo debut as a bandleader in 2013.

Slovakian drummer MAREK DORCIK cut his teeth in his national jazz scene before moving to Manchester in 2006. He has worked with the vanguard of the north-west jazz scene including Mike Walker of The Impossible Gentlemen, and the Cinematic Orchestra’s Stuart McCallum.

Reeds player SHABAKA HUTCHINGS leads his own highly rated band Sons of Kemet. He has also performed in drum-great Jack DeJohnette’s high-powered Jerwood All-Stars, and as a BBC New Generation artist com- posed ‘Babylon’, which was performed by the BBC Concert Orchestra in 2012.