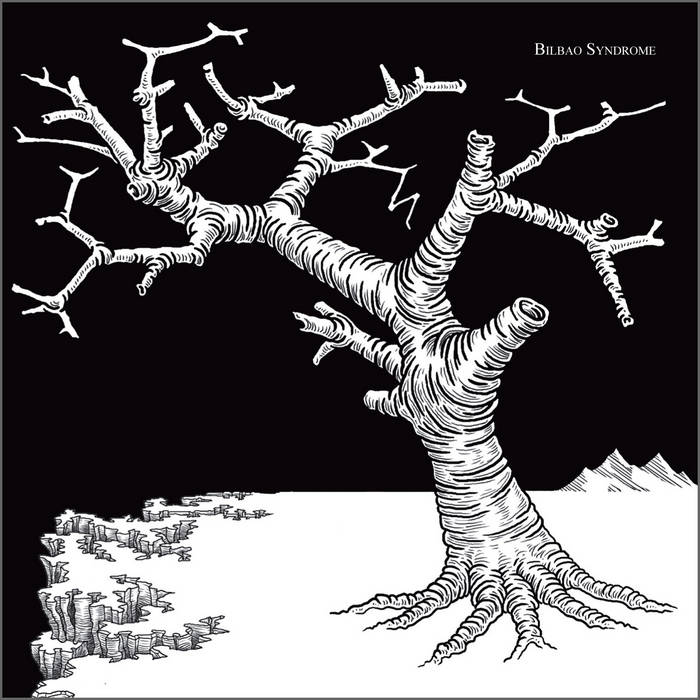 Bilbao Syndrome, a liberating sonic blast of contemporary metal and jazz skronk, is an avant underground supergroup featuring two members of Leeds-based death jazzers Trio-VD (guitarist Chris Sharkey and drummer Chris Bussey), internationally renowned jazz keyboard enfant terrible Matthew Bourne, John Zorn-esque noiseniks trio Minghe Morte's (with Chris Bussey) bassist/leader Colin Sutton and thoroughly imposing frontman vocalist and acidic wordsmith Andrew Plummer of World Sanguine Report. Bourne formed Bilbao Syndrome in 2007 starting a partnership with drummer Chris Bussey before the intensity and scale of their vision made it necessary to hire extra members. Clad in white, skin tight outfits, mirrored aviator sunglasses and powerfully lit with only UV lights; their live show is not for the faint-hearted. Yet Bilbao Syndrome has built up a strong and wide-ranging UK cult following. They now release their long awaited debut CD/vinyl on the Babel Label Bilbao Syndrome I-VI a confrontational and cathartic piece of work that seeks to combine the more extreme elements of metal, jazz and tightly structured composition, with Matthew Bourne writing the lion's share of the themes. The bulk of the material is driven by relentlessly shifting guitar riffs which bring to mind a Ritalin-addled Meshuggah or a more wantonly violent Shining, underpinned by massive lurching bass and nervous, offbeat-laden drum figures. Periodically the rhythmic intensity reaches a climax and the groove breaks down into scattergun snare blasts and offbeat stabs, rendered with a seemingly telepathic sense of timing, recalling the spasmodic assault of The Locust. Plummer's vocals vary wildly from demonic grunts and squeals, through powerful full-throated singing, to ominous crooning, and a charismatic presence that is simultaneously darkly threatening and outrageously camp. Occasionally the voice rises up to an eerily pure near-falsetto with traces of the melancholic unease of Scott Walker's later style. Matthew Bourne, an obsessive collector of vintage analogue keys, demonstrates they're not just to line his bedroom walls with organ and synths providing startlingly unusual timbres which are not content to rest within existing idioms. Rather, Bourne's keyboard parts have constantly shifting roles, from taut percussive stabs through to soaring, eerie ambient melody lines. Elsewhere we hear his abrasive electronic tones cascade over a jittering rhythm section to disorientating effect. Further curveballs come in the shape of sudden interjections of Painkiller-esque ambience, with synth, voice and saxophone trading phrases in free time, and the magisterial eschewing rhythmic density in favour of Wagnerian grandeur and hackle-raising bombast. The rules of metal allow for a certain amount of theatre, provided it is of the Dungeons and Dragons variety. Bilbao Syndrome circumvent the cliches of the genre to conjure a more austere, contemporary horrorshow which is guaranteed to be a divisive, ultimately rejuvenative presence in modern metal as well as well as setting the bar higher for the new age of jazz skronk.

Pianist, keyboardist and composer MATTHEW BOURNE is one of the UK's leading young jazz musicians. He was born on October 6th, 1977, in Avebury, England and first came to the national attention as one of the winners of the Perrier Jazz Awards in London, 2001. In the same year he graduated from Leeds College of Music. Bourne's unique ability to create powerful imagery through an esoteric piano language along with spoken word samples earned him the Innovation Award at the BBC Jazz Awards in 2002. Bourne continued to develop this methodology, delivering intense and highly personal performances at an international level - many of these becoming the focus of Bourne's PhD research, undertaken at the University of Leeds. During this period Bourne was the recipient of the IJFO (International Jazz Festivals Organisation) International Jazz Award in 2005, performing at key international festivals in mainland Europe, Scandinavia, Canada and the USA. By this stage, Bourne had also become co-leader of The Electric Dr M, Distortion Trio and Bourne/Davis/Kane and was beginning to work in a wider context, in the UK and Europe, with other international jazz musicians and with producers such as Dan Berridge (Broadway Project) - a successful partnership that has resulted in the music for two albums (In Finite [2006] and One Divided Soul [2009]) and three award-winning films (Indians [Richard Penfold, UK, 2005], Here is Always Somewhere Else [Rene Daalder, USA, 2008] and Flikan (The Girl) [Fredrik Edfeldt, Sweden, 2009]). Throughout the last decade Bourne's particular stamp of individuality and virtuosity, combined with an uncanny ability to communicate with his audiences, attracted commissions from major festivals and organisations to write and produce large-scale projects (The Glenn Miller Project [Leeds Fuse Festival, 2006], Ending [Conservatoires UK, 2007] and Songs from a Lost Piano [Arts Council/Sound and Music, 2009] and music for dance (Mekwae and The Dancical [RJC Dance, 2004/2006]), as well as classical composition (…and I didn't fall in love, again. Autumn 2004 [BBC/London Jazz Festival, 2004] and Written/Unwritten [London Sinfonietta, 2011]) and collaborative electronic works (Phone Book [Michael Tippett Foundation/Bath International Festival, 2006] and Dinner Music for a Pack of Hungry Cannibals [FuseLeeds, 2009]). Bourne has released two solo albums (The Molde Concert, 2007 and Montauk Variations, 2011) as well as several collaborative works. Bourne continues to pursue his interest in music education, working for a number of years at Leeds College of Music, lecturing in principal study piano, composition and composition analysis. He became Artist in Residence in 2008, leaving in 2010 to pursue his own projects as a leader. Bourne continues to be in constant demand as a pianist and analogue synthesist and has recorded and performed with Sam Hobbs, Franck Vigroux, Laurent Dehors, Marc Ducret, John Zorn, Marc Ribot, Andrea Centazzo, Seaming To, Peter Wareham, Barre Phillips, Roger Turner, Paul Dunmall, Tony Bevan, Annette Peacock and Nostalgia 77.

CHRIS BUSSEY is quoted in Jazzwise as a drummer “stands out as the preposterously talented instrumentalist with a tone and attack huge enough to fill any stadium, let alone a nightclub...” A Zildjian Artists drummer Chris is regarded as one of the top young drummers in Europe. In his Electric shock therapy death jazz band trioVD with guitarist Chris Sharkey and saxophonist were shaking up the jazz scene with their debut recording. In 2010 they won the MOJO Best Album of 2010 as well as the Parliamentary Jazz Award nominee. He is also one of the go-to drummers of his generations performing with a diverse array of artists from Tim Garland, Femi Kuti and Tim Berne to speech Debelle Henry Rollins and Terrorvision.

ANDREW PLUMMER is a composer, vocalist and multi-instrumentalist. He was born in 1979 and grew up in Exeter, moving to London aged 19, where he still resides. Drawn by his insatiable desire to explore sound and music, Plummer enrolled on the Sonic Arts degree programme at Middlesex University. It was during this period that Plummer started to crack open and develop his language in composition, improvisation and performance. Following a brief period as a recording and mix engineer, Plummer recorded and released Lady Chanson Lane (2003) and Diamond Suicide (2005) on Kabukikkore label. In late 2006 Plummer formed his band: World Sanguine Report featuring some of the UK's finest and most acclaimed young musicians. W.S.R.'s debut was released on the Gravid Hands label (2009) to wide critical acclaim. Outside of these three releases, Plummer can be heard guesting or collaborating on over 10 releases by indie punk band Sarandon; modern composition ensemble: Fringe Magnetic; Norweigian skronk outfit: EGG3; IDM duo: Old Man Diode, Snack Family and Bilbao Syndrome. Previous collaborative performance pieces and tours include: Hong-Kong based fashion designers Daydream Nation A/W show at London Fashion Week 08, Matthew Bourne's national CMN tour: Songs From A Lost Piano, WSR's 'Third One Rises' UK tour and working with choreographer Frauke Requardt on her new work 'Episode' including European tour dates. Plummer has also performed at Cheltenham, London, Marsden, LIMA, LOOP and Oxford Jazz Festivals with various groups including Fringe Magnetic, Minghe Morte, Bilbao Syndrome and his WSR. He is currently finishing off his second album for WSR, fronting Bilbao Syndrome and writing collaboratively with a new greasy low-rock trio Snack Family.

CHRIS SHARKEY was born in Gateshead in 1978 and now resides in Leeds. He plays guitar in no particular style with lots of different people. The key bands are the acclaimed TrioVD, the sadly departed second phase of Acoustic Ladyland, the Geordie Approach, Andrew Plummer's World Sanguine Report and Fraud. He is a co-founder of the Leeds Improvised Music Association (LIMA). John Fordham of the Guardian thinks he is, "… at the cutting-edge of contemporary improv-fusion guitar technique, colliding headlong free-jazz phrasing with roaring thrash metal riffs and ghostly electronics." And Jazzwise talk about his "… astonishing technique produce a vast array of otherworldly sounds from his battered looking Fender Strat, creating a torrent of angular flurries, gut-wrenchingly heavy, chugging, riffs and spaced out looping. He's one of the most exciting young guitarists on the UK scene, and one that might just find fans in both free jazz and avant metal camps." The great John Surman commented as follows, "Chris is a highly creative and seriously motivated artist.His stylistic range is really huge and I'm certain that he has an amazing future ahead of him."

COLIN SUTTON was born in 1977. He gained a Masters degree in Jazz at Leeds College of Music where he became a founding member of LIMA (Leeds Improvised Music Association). As an improvising musician his work has always been heavily inspired by the work of Glenn Branca and Keiji Haino, with his aggressive and violent sound explorations often resulting in physical injuries (mostly minor). In 2007 he recorded an album with his trio Minghe Morte ("gore-spattered car crash jazz" - Daniel Spicer, Jazzwise), which received support from Radio 1 and 6Music. He is also currently a member of slo-mo house group Black Diamond Bay, who played at last year's Leeds and Reading Festivals and had their most recent single chosen for the Radio 1 playlist.