III: MOMENT GONE IN THE CLOUDS 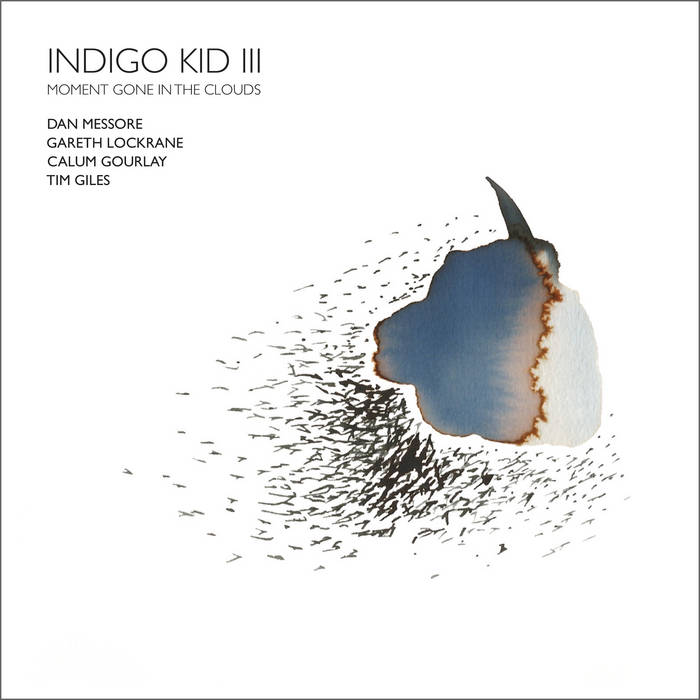 • The gifted, idiosyncratic guitarist, Dan Messore, presents his third Indigo Kid recording, ‘Moment Gone in the Clouds’.
• Still a quartet, but this time with a totally new line-up, featuring the exceptional flautist Gareth Lockrane, top-notch bassist Calum Gourlay and the inspired drummer, Tim Giles.
• Messore composed all eight tracks for this new album, and his combination of lyricism, swing and fluid improvisation are once again in full evidence - giving the band a flexibly loose but always unified groove.
• A number of styles emerge, but are woven into subtly evolving directions….Latin rhythms, songbook ballads, cool school, post-bop, funk, jazz-rock, exploratory soundscapes, and much more.
• The album was recorded and mixed by the highly-regarded Owain Jenkins at his StudiOwz recording facility, near Haverfordwest, Pembrokeshire.
notes: Messore’s rich archive of musical influences are certainly on show, although often in a seamlessly blended way - traces of English folk, Americana, rock, pop, soul and African and South American traditions. Music writers have made comparisons with Frisell, Metheny, Scofield, Rosenwinkel, as well as jazz guitarists from earlier eras, and they are probably all in there somewhere, but the resulting style is pretty much pure Messore.
Lockrane’s flute is equally a wonderfully flowing sound, full of grace and dexterity, and an absorption of many eras of jazz and diverse musical influences. Gourlay like all fine bass players anchors the whole sound together, with a deftness of touch - whilst Giles’ drumming is a master-class of carefully-judged, but dynamic propulsion. Messore and Lockrane seem especially musically merged.
The new line-up gives a rather different tonal landscape to the band, compared to the first, self-titled Indigo Kid album, (2012) with Iain Ballamy, Tim Harries and Gethin Jones, and the 2nd studio outing, ‘Fist Full of Notes’ (2015) with Ballamy again and Trish Clowes sharing saxophone duties, Tim Harries again and the redoubtable Martin France on drums. (Both albums on Babel)
As well as Indigo Kid, Messore keeps ridiculously busy with other projects, including: Lacuna, the quintet with trumpeter Steve Waterman, who released ‘Talk on the Step’ (Babel) in 2012; Sky Barkers, a vocal trio with his wife, Jojo and her two sisters; guesting on baritone saxman George Haslam’s ‘Words Unspoken’ album; the Trust Trio with bassist Aidan Thorne and drummer Mark O Connor; and as a member of the grunge-folk Welsh band, Little Arrow, and the Bristol-based Michelson Morley (with Jake McMurchie).
In addition, he has coordinating an Edinburgh fringe show, curated a music festival, and played two residencies at The London’s Vortex club…..one with the rotating septet, View from the Tower, including Gareth Lockrane, Joe Wright, Trish Clowes, Steve Waterman & Elliot Galvin, and secondly, his organ trio, Kindling, featuring Joe Webb (organ) and Gethin Jones (drums).
So, Dan Messore certainly hasn’t wasted any time since completing his studies for an MA in jazz at the Royal Welsh College of Music and Drama in Cardiff, in 2006 - where he was tutored by such musicians as John Parricelli and Huw Warren. Yet, musically, he never feels as if he’s trying to reach where he’s heading any faster than he needs to. (official website: www.danmessore.com / www.babellabel.co.uk)