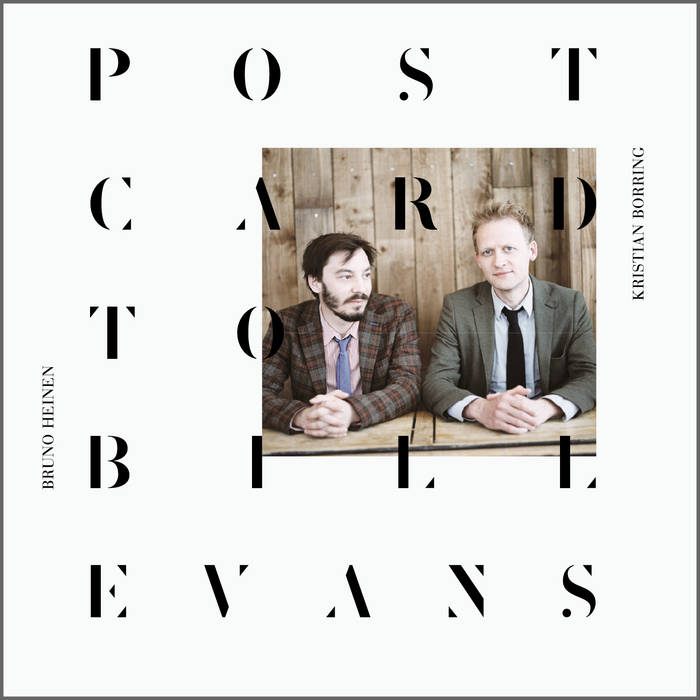 ‘Bill Evans was my way in to jazz. At 18 years old, my uncle (Johannes Heinen - a Koln based jazz pianist) gave me a copy of Sunday at the Village Vanguard. At the time I was only playing classical music (and hadn’t checked out much jazz at all), but that album opened my ears to a whole new way of thinking. I was drawn first to his sound and classical approach. I transcribed most of his solos from that album, and from there began the work of learning the language. He will always remain my biggest influence.’
- Bruno Heinen

The contemporary jazz artist’s evolutionary path is rarely a straight one. Stylistic and conceptual twists and turns are natural occurrences along the road, especially for the contemporary jazz musician. Both the exceptional upcoming young pianist Bruno Heinen and London-based Danish guitarist Kristian Borring who have recorded this duet exploring the works of a master of modern jazz piano Bill Evans, are indeed no exceptions.

In the case of Bruno Heinen, having released a well-received concept CD in 2013, working with 12 music boxes, based on the futuristic vanguardist Karl Heinz Stockhausen’ Tierkreis from 1974 (Bruno’s father was a professional cellist who performed the piece with Stockhausen in the 1970s), this intriguing young pianist now turns to Bill Evans, another giant in the modernist tradition but from the lyrical side of jazz. Not a logical path on the surface perhaps, but as John Fordham said in The Guardian, Heinen is, “the kind of newcomer who repositions the goalposts.” We can look also at Heinen’s solid classical background as a characteristic influence running through all his work to date. Although the spotlight for this new CD might turn on Heinen, it being a genuine reinterpretation of his compositions (all but one) written by a jazz piano legend, by listening to the CD, it is clear that guitarist Borring is an equal partner in the collaboration. He’s been described as having “a hyper-cool approach to jazz guitar”, has been London-based since 2005 and is a quartet bandleader in his own right releasing a highly impressive second album Urban Novel in 2014.

Heinen studied classical music at the Royal College while Borring was at the Conservatorium Van Amsterdam in The Netherlands. But their paths first crossed when both went on the jazz post-grad course at London’s Guildhall School of Music. Heinen was mentored by John Taylor, another Bill Evans acolyte, who has referred to Heinen’s debut album Twinkle Twinkle leading the Dialogues Trio (with bassist Andrea Di Biase and drummer Jon Scott). in 2012 also for Babel records as an “excellent achievement”.

Postcard to Bill Evans is a recording characterized by a feeling of timelessness and an exquisitely breezy playfulness especially on the first track, one of Evans’ most cherished originals ‘Time Remembered’ from 1962. Heinen opens with a hypnotically chiming piano figure, before a delicately played unison between the pair settles into a breathtakingly dynamic swinging counterpoint. ‘Peri’s Scope’ written in 1959 for Evans’ girlfriend, draws from swing and bebop idioms reflecting something Evans always stuck by, even in his more reflective classical music-orientated moments. The duet as well has both these sides, but their strong personal concepts and intimate chemistry create a fresh, unique interpretation.

Evans’ classic ‘34 Skidoo’ is turned into a dreamy ballad by the duo with piano and guitar united in sensitive outlining and understated improvisation of the gorgeous melody. The Thelonious Monk-like ‘Five’, an early Evans signature tune, becomes an exercise in fluid 1950’s west coast-ish bluesy counterpoint, the pair seeming to read each other’s minds in their perfect synch up. ‘Epilogue/Some other Time’, both recorded initially in 1958, are combined to reveal the deep sensitivity and delicate touch of Heinen’s ballad playing. Not for nothing did The Guardian’s John Fordham refer to Heinen as sounding like, “the kind of erudite and curious new arrival destined to make a real difference.” The segue into the ‘Some other Time’, a composition that bears a similarity harmonically to Evans’ famous Kind of Blue composition ‘Blue In Green’, is given an attractively pastoral ambience by the duo. ‘Displacement’ originally recorded in 1956 features Borring’s warmly stated tantalizing chords while the title track ‘Postcard to Bill’, the only original on the album, starts with a Borring and has a hint of Jim Hall about it, a reminder of the guitarist who partnered Evans on the classic album Undercurrents in this same format, ending with Heinen’s shiny George Shearing-like chords. ‘Show Type Tune’ one of the CD’s later compositions written in 1962, features the guitarist’s heart-warming bossa chords. On the concluding ‘live’ version of the much-loved standard ‘All the Things You Are’, a big favourite of Evans, Heinen and Borring combine a swingin’ feel and imaginative phrasing, the combination of which Bill Evans would doubtless have approved.

Postcard to Bill Evans is not only an exquisite and highly effective addition to the now weighty discography of Bill Evans dedications but a further evolutionary step along the roads of these pair of tenderly inquisitive, outstanding young jazz musicians.

Bruno Heinen is a London based contemporary pianist, composer and bandleader. His recent endeavours include collaborations with Julian Siegel, Martin Speake, Byron Wallen and Christian Brewer. Bruno studied classical piano at the Royal College of music and went on to win prizes from the Musicians Benevolent Fund and the Countess of Munster Trust as well as nominations for the prestigious Paul Hamlyn Composers Award and the British Composers Award. Bruno now teaches Jazz harmony to the classical piano students at the Guildhall.

As a composer, Bruno has written for groups ranging from sextet to two pianos and percussion, and from big band to classical string trio. He has released two other notable titles with the Babel Label. The Dialogues Trio’s Twinkle, Twinkle was released in 2012 with bassist Andrea Di Biase & drummer Jon Scott, and featured acclaimed saxophonist Julian Siegel. This was quickly followed by the 2013 release of Karlheinz Stockhausen’s ‘Tierkreis’ for Jazz sextet. The piece was originally written for twelve music boxes, one for each sign of the zodiac. Four of the original music boxes have been in Bruno’s family since he was born which started the fascination with the piece. Incorporating the boxes in the performance, Bruno premiered the arrangement at the Vortex Jazz Club. The sextet features James Allsopp, Tom Challenger, Fulvio Sigurta, Andrea Di Biase and Jon Scott.

‘Heinen sounds like the kind of erudite and curious new arrival destined to make a real difference.’
John Fordham - The Guardian