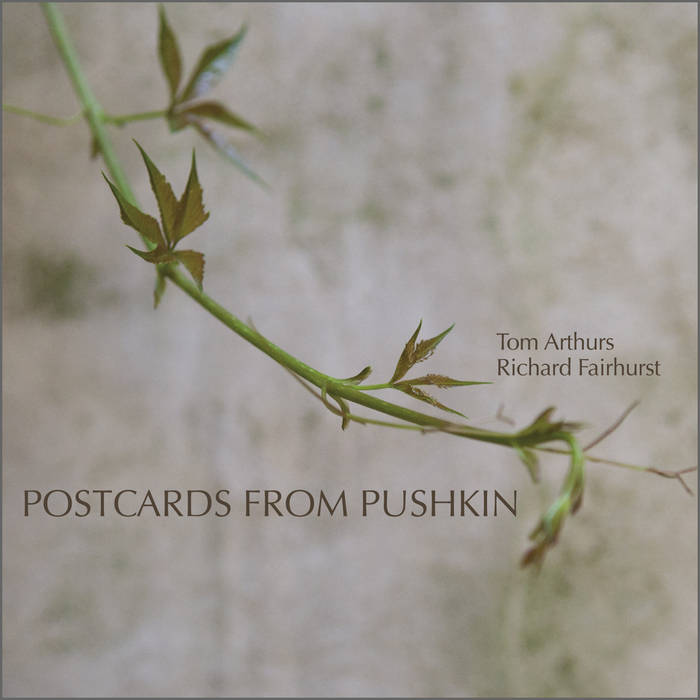 The new recording Postcards from Pushkin is the next phase in the intensely intimate duo collaboration between two of the most widely acclaimed Babel Label recording artists. The 31-year -old Berlin-based, English trumpeter/flugelhornist Tom Arthurs and 35-year-old pianist Richard Fairhurst are highly lauded musicians and composers who have explored the outer limits of the 'jazz' genre in the past decade in often unusual settings. Arthurs in particular is someone who is not only open to inspiration from a wide spectrum of musical spheres, but also from the arts and humanities, be it avant garde European cinema through to philosophy, and even gastronomy. His central interests in music, from Dave Douglas through to György Ligeti, cannot be separated from his broader artistic sensibility.

The new recording makes the point, based as it is around the pair's response to the work of early nineteenth century romantic poet Aleksander Pushkin. Picking up on quotes from the verses of the figure that many regard as Russia's greatest poet, Arthurs and Fairhurst reveal the minimalist grace and romanticism at its heart, but add a twentieth century modernist twist with a Euro-centric approach to improvisation that acknowledges the great pioneers in that field from Kenny Wheeler through to Keith Jarrett. The feeling is of a story being told, but as Arthurs' love of filmmaker Jean Luc Godard would suggest, one of fragmented narratives and musical symbolism. Yet through their abstract yet lyrical dialogue on Postcards, the duo's journey always takes up a clear direction.

Postcards from Pushkin continues the duo's work on the highly rated Mesmer, (“a subtle and beautifully performed dialogue” said The Guardian), their debut on Babel from 2007. It reflects the pair's mutual interest in developing bridges and creating blurs between diverse classical and jazz forms, and between composing and improvising. Both musicians have built up extremely impressive CVs. The Guardian has described Fairhurst as 'one of the UK's most inventive pianists'. It's the F-IRE Collective member Arthurs' 4th and Fairhurst's 7th for Babel, the latter an original Babel recording artist from the early 1990s with the inventive Hungry Ants. Fairhurst, a Steinway International piano artist since 1998, is also a celebrated composer being a BBC Award winner in 2004 for Best New Work - and it was actually while performing this album at the BBC Jazz Awards that year, that he met Arthurs who was depping in Fairhurst's group Nest. Following an intensive period of rehearsal and development performing at Steinway Hall and the Vortex Jazz Club in London, the duo released their debut 'Mesmer'.

The BBC and RPS commissioned Postcards from Pushkin for the 2009 City of London Festival and a prestigious Proms performance in 2009 was part of Tom Arthurs' involvement as a BBC Radio 3 New Generation Artist, only the second jazz-reared musician after the pianist Gwilym Simcock to be asked to join the scheme.

The duo have come along in strides following their performances at International Jazz Festivals in both Bath and London, the Jazz d'or Festival, and Pizza Express Jazz Club, and for BBC Radio 3 and the new recording Postcards from Pushkin is the high point of their achievements so far.

Born in 1980, TOM ARTHURS studied with Dave Douglas, Joe Lovano and Jim Black at Banff Centre for the Arts (Canada) back in 2001. A member of the F-ire Collective, Arthurs went on to win the Peter Whittingham Award, and pick up three time nominations in the BBC Jazz Awards (Best Instrumentalist and Rising Star). Besides the duo with Fairhurst, his current bands also include the trio arthurs.høiby.ritchie, featuring the Phronesis leader and bassist Jasper Høiby; Glue with Miles Perkin and Yorgos Dimitriadis, Satre's Croissant with Philipp Gropper, Petter Eldh and Marc Lohr, a duo with Simon Vincent (electronics) and, performing and recording with Sam Britton (e), Ollie Bown (e) and Lothar Ohlmeier (s,c) among others. He has also recorded and performed with a wide range of musicians from John Taylor, Jack DeJohnette and John Surman through to Julia Hulsmann, Julie Sassoon, Seb Rochford, Ingrid Laubrock and and electronic music manipulators Icarus.

Arthurs has been awarded writing commissions from the BBC/RPS for both the City of London Festival (Postcards from Pushkin with Richard Fairhurst), and the BBC Proms. The Geneva Downtown Orchestra also commissioned a suite of music for 9-piece ensemble with Arthurs.Høiby.Ritchie at its centre. 2010 saw the commission of Fire Paintings (for Yves Klein), which was premiered by the BBC Concert Orchestra with Tom and drummer Stuart Ritchie as soloists, and 2011 a further BBC commission for the Elias Quartet plus Swiss drummer Samuel Rohrer. Tom has been featured extensively on BBC Radio 3 as part of the New Generation Scheme and beyond, and has international festival credits including Berlin, North Sea, Cheltenham, Moers, Bath, Jazzd'or, London, Manchester, Belfast and Jerusalem.He is currently on the Take Five Europe peoples scheme.

Recording for the first time with the Babel label when just 19, Richard Fairhurst released 3 CDs as leader of the band The Hungry Ants, mentored by Iain Ballamy: The eponymous debut, Formic and Myrmidons have since become cult classics in the 100-album strong Babel catalogue. He won the Pat Smythe award for Young Musicians of Outstanding talen and . A prodigy, He studied improvisation in his teens at the New Scool University in Manhattan, has been a Steinway international artist since 1998, He had a residency at Ronnies with Ballamy at age 20, and in 2000 reached the final of the Montreux Jazz festival Solo Piano competition. A new sextet released Standing Tall on Babel, commissioned at the Cheltenham International Jazz festival winning a BBC Jazz award for Best New Work in 2004. Mesmer was his fifth release on Babel with Tom Arthurs in 2007. His first piano trio recording Triptych with Jasper Hoiby and Chris Vatalaro was released on Babel to plaudits in 2009. He teaches his compositions on the jazz course at the Royal Academy of music and recently performed a Steinway Piano duet with John Taylor at the Steinway Piano Festival at Soho Pizza Express.

'This is music to hear pin drops by...in essence it's the chance to eavesdrop on two considerable intelligences communing without words - and that's not something you get everyday.'
-JAZZWISE-